Amidst many celebrities who are making time to catch up on the ICC World Cup in Manchester, here’s another family that has taken off to England. Not too long ago, we saw the Kapoors aka Kareena Kapoor Khan and Karisma Kapoor enjoying their time in the Queen’s city with Saif Ali Khan also attending a match in Manchester, now another Kapoor family has decided to showcase their cricket love. Anil Kapoor and Sanjay Kapoor are currently in Manchester as they decided to catch the semi finale of India vs New Zealand in Manchester and there were in for a pleasant surprise! 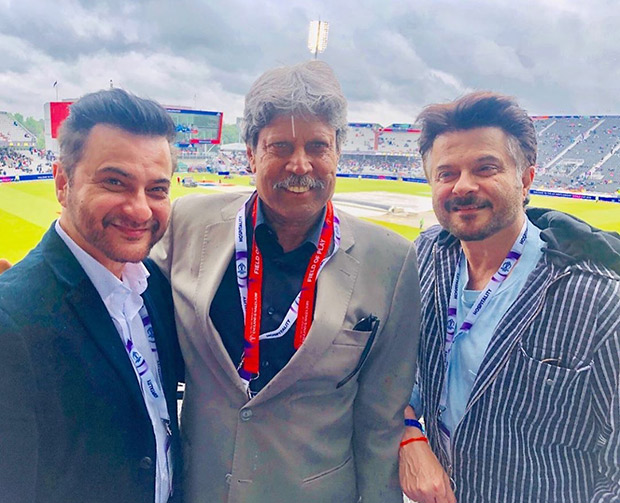 Anil Kapoor and Sanjay Kapoor, who decided to attend the much talked about ICC World Cup in Manchester, they bumped into cricket legend Kapil Dev. The former Indian skipper, needless to say, was equally happy to see them and was all smiles for the camera. Sanjay Kapoor took to Instagram to speak about their by-chance encounter with Kapil Dev and shared this photo saying, “With the legend Kapil Dev, I can’t stop grinning #1983worldcup #captain #greatestallrounder #fanmoment.”

It is a known fact that Kapil Dev is one of the most respected cricketers in the country. He was the captain of the Indian cricket team when India got its first World Cup home and the moment is expected to be recreated on celluloid! The forthcoming film ’83 directed by Kabir Khan will feature Ranveer Singh in the role of Kapil Dev and the anticipation about the film is quite high!

On the other hand, coming to the ongoing ICC World Cup, the India vs New Zealand was called off midway a day ago owing to the weather conditions. The match has been scheduled today and it will pick off from where it was left yesterday. While India’s batting is pending, New Zealand made 211 runs yesterday and has lost 5 wickets by far with a few overs pending.