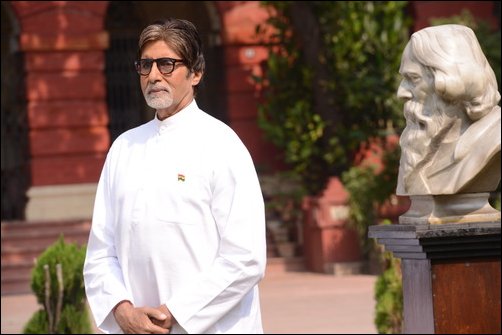 Marking the occasion of India's 66th Republic Day, the team of the upcoming film Piku decided to do something special. Shoojit Sircar along with Amitabh Bachchan shot for a video on the National Anthem at Jorasanko Thakur Badi, the residence of renowned poet Rabindranath Tagore at West Bengal.


While shooting for Piku in Kolkata, Shoojit and Amitabh Bachchan decided to shoot for the video featuring the megastar singing 'Jana Gana Mana'. As they started hunting for the appropriate location, they decided to shoot it at Jorasanko. Considering that Rabindranath Tagore was the poet who wrote the National Anthem during the British Rule in India and also, that the location hasn't been previously used for many videos or films, the two of them immediately decided to use this historical place as the backdrop.

Talking about it, Amitabh Bachchan wrote on his blog, "A spirit of patriotism and literature, of poetry and pride, of nationhood and divinity, explode within in waves of compassionate emotion. I walk through the portals of the residence of Nobel Laureate, poet, writer and the representative of cultural Bengal and indeed in many respects the entire world - Gurudev Rabindra Nath Tagore, in Kolkata at Jorasanko Thakur Badi, and sing the National Anthem for a visual recording." The said video released on the Republic Day, that is, January 26.