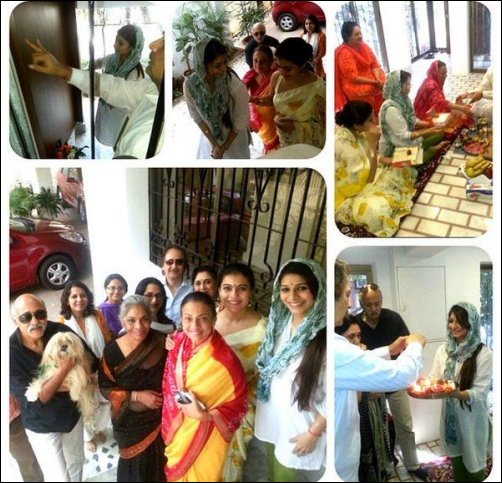 Hailing from a family of Bollywood celebrities, it was no surprise when Tanisha Mukerji decided to follow the footsteps of her sister Kajol and veteran superstar Tanuja. However, the actress could not gather popularity unlike her sibling or mother, and hence decided to shift her focus towards production than acting. However, she recently gained fame by being on camera during her stint at the reality show Bigg Boss. After that, Tanisha has decided to concentrate on her production house and inaugurated T Mukerji Media (TMM) recently.


In fact, the actress turned producer even performed a pooja with her family members Kajol, Tanuja and Kajol's mother-in-law Veena Devgn at the location which is a three storeyed office located in Santacruz, suburban Mumbai. The one who missed out on the rituals was her brother-in-law and Kajol's husband Ajay Devgn who is currently abroad shooting for his ambitious project Shivaay. Talking about her first project, Tanisha mentioned that they will be starting the film this year itself. Expressing her happiness over the contribution that Kajol and Tanuja has made to the industry, Tanisha also further stated that Kajol will be a part of it in some way or the other.