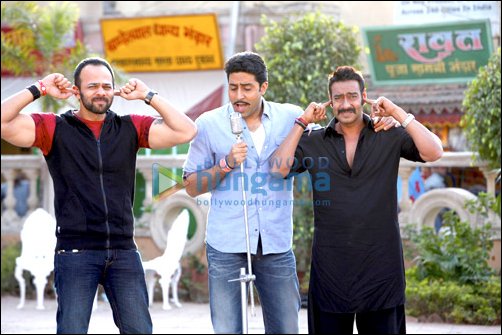 We have always heard of the famous joke of a husband telling his wife not to sing as the neighbors may think he is torturing her! Though in this case, it isn't husband and wife, the situation is similar with director Rohit Shetty and Ajay Devgn, who seem to be protecting themselves from Abhishek Bachchan's verbal earthquake, on the sets of Bol Bachchan.

News is that, Bol Bachchan is almost 95 per cent complete and the film is due for release on July 6, courtesy Rohit 'Workaholic' Shetty, who had already begun working on this film immediately after Singham. This film stars his eternal blue eyed boy Ajay Devgn alongwith Abhishek Bachchan, Asin and Prachi Desai. The film is being produced by Shree Ashtavinayak Cinevision Ltd and Devgn Films production and is presented by Fox Star Studios.

Talking about Bol Bachchan, Rohit said that since Singham was a hard hitting action film, he wanted his next film to be a light-hearted comedy and that Bol Bachchan fitted the bill totally. He also added that, the film is a family entertainer offering the right mix of emotions in equal proportions. He does confess that he has taken basic concept from Hrishikesh Mukherjee's Golmaal, but, at the same time, he also makes it a point to clarify that the rest of the film is completely different from the original. The film also stars Archana Puran Singh, Paresh Ganatra, Krushna Abhishek and VIP (of TV show 'Comedy Circus' fame). Rohit highlights that Abhishek's character's mannerisms will form one of the main USP of the film.

And since it's a Rohit Shetty film, there are indeed hand-to-hand combat scenes, with buses and cars being blown up too. And we are not giving any 'Bol Bachchan' about that!