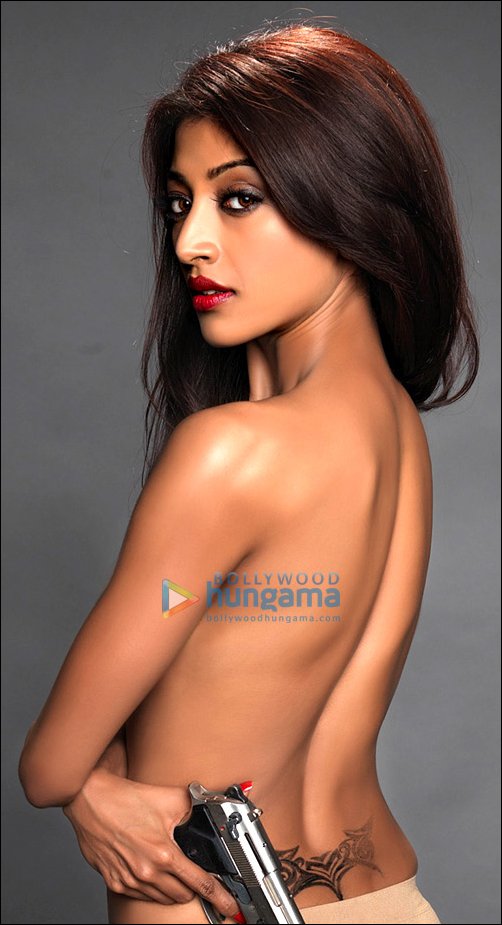 Stirring up a lot of buzz was the mystery girl in the bold poster of Vikram Bhatt's next Hate Story directed by Vivek Agnihotri. The daring poster had created quite a swirl with only her tattooed bare back and a gun, with the makers keeping mum on the identity of this unknown woman for a long time.

Well, they have now revealed the actress on the poster who is Bengali bombshell, Paoli Dam.
The actress is all set to take Bollywood by storm starring in Vikram Bhatt's next bold movie titled Hate Story which has been penned and produced by him solely. Directed by Vivek Agnihotri, the movie is based on a woman's vengeance and how she uses her sexuality as a lethal weapon. The film also stars Nikhil Dwivedi and Gulshan Devaiah.

Paoli is a Bengali actress, who made her debut with the Bengali film Agnipariksha in 2006. She came into limelight in 2009 when she won several accolades for her Bengali film - Kaalbela, directed by notable Director Gautam Ghose and has also received an award for Shera Bangali New Face 2009.

She has also shared screen space with Bipasha Basu in Shob Charitro Kalponik directed by Rituparno Ghosh. Paoli was recently in the news for her nude scene in the movie titled Chhatrak which was premiered at the Cannes and Toronto Film Festivals. The sultry actress raised a lot of eyebrows from several quarters for this explicit scene containing full frontal nudity. In fact, she is the first Bengali actress to have done such a sensational scene in a Bengali movie!

“Bollywood is not a family, it never was and…

“Draupadi was a dress rehearsal for my later…