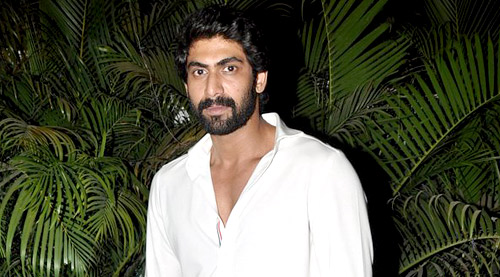 One thing that cannot be taken away from Rana Daggubati is his honesty. Belonging to an enviable film lineage and secure in his self, Rana has been juggling between films in Bollywood as well as down South. While his Telugu and Tamil films have been successful, he has gained some appreciation up North as well. Meanwhile, with Baby getting rave reviews from all over, he is back in circulation in a big way as his partner act with Akshay Kumar is being much appreciated, especially due to the hulk persona that he carries in the film.

I like this space very much. What happened was that I was stuck with the shoot of my South film Bahubali for two years and though there were lot of offers coming in the interim period, I wanted to get the right film in Bollywood. This is when Baby came which was right up my alley. Moreover, I like Neeraj Pandey's films, whether it is Special 26 or A Wednesday. Now Baby is a very genre specific film. I knew I had to do it.

What was that special something about Baby that made you go for it?

The fact that it is an action thriller set in a realistic space. The way Neeraj has treated the film, it is an ensemble affair and yet everyone stands out. The way he shoots his films is terrific, something that you can see now with Baby. That is something I wanted to be a part of.

Since the film has you playing a colleague of Akshay Kumar, how did the on-screen camaraderie play with him?

Akshay is a big star, he is fantastic. He is one of the biggest action heroes that we have. Moreover, both of us do our own stunts which bring in all the more fun. Both of us are trained in action and this is where we complement each other well. I enjoyed working with him in the Abu Dhabi and Delhi schedule. There was a lot of bonding which reflected on screen. He is also great human being in terms of pulling things together when it comes to discipline.

You and Taapsee Pannu have worked together down South too in Arrambam. How does the tuning between the two of you work?

Actually we shot together for just one day. As you can see, Taapsee is playing a very solid character in the film. The action that she has done in the film is already being talked about.

Meanwhile you are someone who definitely has a mind of her own. With Neeraj Pandey as a director, were there any intelligent and engaging conversations that the two of you shared?

There is always great communication between us. He is serious about his films and very clear about how he wants to tell a story. He is a complete guy, the captain of the ship. To be honest, there were no creative inputs that came from me since he is so perfect in his craft. It is all there in his mind. He gave me such a solid brief that I didn't have to go and explore anything myself in terms of research. As I said, he is someone who is very straight and clean. He is a no nonsense guy.

As for your own stint in Bollywood, how do you think it is going? Since you are juggling between assignments across languages, how receptive do you think Bollywood is towards you today?

(Pauses) You know, when I came with Dum Maaro Dum. I think at that time there were lesser number of people from my age. Today, a lot more youngsters have arrived. There are Varun (Dhawan), Sidharth (Malhotra), Arjun (Kapoor), Aditya (Roy Kapur) and others. They were not there then. Having said that, I am still confident of my own skills. I have my unique traits. Also, people in the industry are good towards me. I would continue to do my films. I know that post Baby and especially after Bahubali, there would be a different perspective for me in the industry.