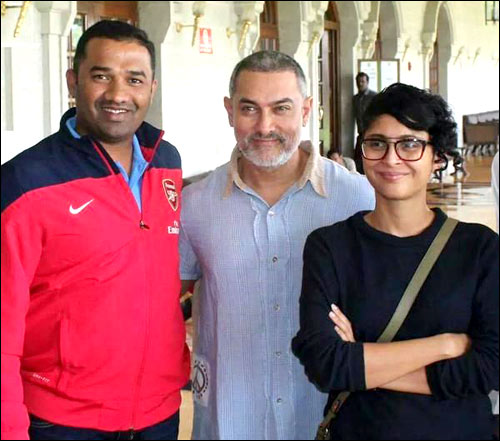 Surprises are what Aamir Khan is known for! The superstar has left us speechless with his performances several times. The actor seems to be in no hurry in releasing a film in 2015 and hence, has also stayed aloof from the media glare post the grand success of PK. It is now that we realized the reason behind it is - Dangal.

For months now, there have been speculations about Aamir Khan playing the role of a wrestler in the upcoming film Dangal) which means a wrestling match), a biopic based on the famous wrestler Mahavir Phogat. Though Aamir Khan never spoke about his next film after PK during the promotions, now it seems we have got a thumbs up from the actor's side. After more than a month, we spotted Aamir Khan along with wife Kiran Rao recently. He was seen in a beefed up avatar after extensive physical training, since it is very different role from the 'alien' he played in PK. And what added to the 'wrestler' look was the salt pepper beard and the almost bald look.

With many actors including Salman Khan and John Abraham having their eyes set on wrestling (both are making a biopic on wrestler Gama Pehlwan), it seems the sport will gain a lot of momentum in the future years.