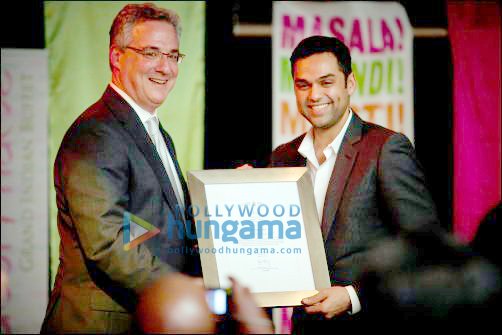 Fresh off the success of his last release Zindagi Na Milegi Dobara, Abhay Deol was honoured this year as the featured celebrity at the Toronto (M! M! M!) Film Festival.

Abhay Deol who rode into Bollywood as the dark horse managed to win accolades for his brilliant performances and took the industry by storm- Apart from featuring as the "new face of Indian Cinema" on the covers of Time Out and Man's World, Abhay was felicitated at the prestigious film festival held at the Harbour Front Centre which celebrates South Asian Culture between the 19th-21st August 2011.

Jason Kennedy, Minister of Citizenship and Multiculturalism said on behalf of Prime Minister of Canada, Stephen Harper said, "Many in Canada have appreciated Abhay's films, particularly in the South Asian Diaspora, and we hope that his presence at the festival will continue to excite and entertain Canada and her diverse people."

The M!M!Movies held a discussion with the actor followed by the screening of his films -There was also a retrospective of his movies -Dev D, Oye Lucky Lucky Oye, Manorana Six Feet Under and Ek Challis Ki Last Local.