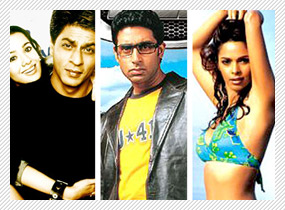 Ten years down, we can look back on 2004 as a milestone year in Hindi cinema, with significant films and many firsts. Here's looking at 2004, best known as the year of Murder, Main Hoon Na and Dhoom.

Before the Corporate Revolution

This was the period when the corporate filmmaking institutions had yet to make a significant impact, and the cost to profit ratio of a film was still considered the first and only criterion for assessing the degree of box-office success. From the following year, the overall amount of collection became a major issue, as corporate and superstar prestige began to be involved.

And so, Mukesh Bhatt's Murder, low-budget in comparison, was declared as the biggest hit of the year, over Gauri Shah Rukh Khan's co-production with music label Venus, Main Hoon Na or Yash Raj Films' super-hit Dhoom.

A Year of Multiple Firsts

Yash Raj Films' Dhoom, a first-of-its-kind (in Hindi cinema) caper film laced with testosterone, was the third major hit, and this was the first signed film of composer Pritam after his partner Jeet Ganguly (now of Aashiqui 2 fame) decided to split the team. Though Pritam had two small releases earlier as solo composer, he took off with Dhoom in a big way, with Tata Young's English and Sunidhi Chauhan's Hindi versions of the title-track becoming hits even in European, American and Far-Eastern pubs.

Ten years down, Pritam has only consolidated his status, ruling as the uncrowned yet undisputed Numero Uno composer for most of this phase.

Yash Raj Films, for the first time under the stewardship of Aditya Chopra, went into multiple productions, with three releases in a single year. The other two releases were Hum Tum, a romantic comedy, and Veer-Zaara, an Indo-Pak love story that Yash Chopra directed and Aditya wrote. The latter film was a blockbuster overseas along with Main Hoon Na, sure proof that Shah Rukh Khan was the unchallenged box-office king among NRIs.

Hum Tum (though in a cameo) and Dhoom became Abhishek Bachchan's first hits after being an actor for four long years, just like his father Amitabh Bachchan made his breakthrough in 1973 after a 1969 debut!

Hum Tum was the first film to have an animated segment within a live action feature film. And Veer-Zaara used, for the first time, unused tunes of legendary composer Madan Mohan (who had died in 1975!) as the complete music score of the film. The recordings were supervised by the composer's son, and Javed Akhtar, who had never worked with the music director, wrote lyrics to the tunes.

Talking of animation, for the first time a mix of live action and animation done in Shaadi Ka Laddoo, directed by Raj Kaushal. This humble face-value romantic comedy saw the then-celebrated Negar Khan perform an item number to animated characters!

Another epoch-making first, though not as well-known or celebrated with the masses, was that Digital Intermediate (DI), a post-production technical process that corrects, enhances or streamlines the look of a movie or sequences to harmonize with the moods, was used for the first time in Rajkumar Santoshi's Khakee. This film was produced by Keshu Ramsay, earlier known for his Khiladi brand of films.

Prasad EFX came in to do this then-unique process, necessitated by weather irregularities that the film's team encountered in key sequences shot in the same locations - Nashik in Maharashtra - in different seasons!

Today, DI is as consistent a feature of every big and small film as background music!

In an even bigger technological triumph, the 1960 all-time hit Mughal-E-Azam was 'colorized' (converted to color from the original black-and-white). This mammoth feat was achieved by a synchronized synergy between the Indian Academy of Arts and Animation and Rajtaru Studios in Mumbai and Iris Interactive in Chennai at the cost of around two crore.

Released alongside Veer-Zaara and two more films in Diwali week, Mughal-E-Azam is thus the first colorized film, and still the only one to be a hit, that too when released amidst contemporary competitors.

Original composer Naushad insisted on being a major part of the Dolby 6.1 musical soundtrack of this film, caringly reworking his chartbusters and background score in stereo, and in the process, sadly damaging his health irreversibly, as he was over 83 years old then!

And as if these were not enough, Abbas-Mustan gave us a "human" car that was a vendetta machine in Taarzan - The Wonder-Car, Ayesha Takia's first released film. A children-oriented entertainer with great music by the fast-upcoming Himesh Reshammiya, it was a flop then but is a cult favourite now on movie channels and with kids for its Disney-like ambience.

In terms of themes, there were some more firsts as well. Girlfriend, a small-budget film with Isha Koppikar as protagonist, was a thriller centering round obsessive love. What, however, made it stand out in this genre, was that she was a lesbian. Girlfriend became the first film to spotlight lesbianism in Hindi cinema.

Indra Kumar's Masti was the first A-grade sex comedy made in Hindi cinema with stars, with Ajay Devgn and Lara Dutta topping the cast. The only such respectable film earlier was Sabse Bada Sukh in 1972, directed by Hrishikesh Mukherjee, with non-stars. Later films like Pati Patni Aur Woh and Shaukeeen had tackled adult themes, but without risque sequences or lines!

Pooja Bhatt's debut directorial, Paap, was the first Indian film to start the now-rampant trend of incorporating Pakistani musicians in Hindi films. The songs were sourced from the 'Net, its creators approached and licenses taken. Wherever possible or needed, the songs were modified and re-recorded to suit the specific needs of the film.

In another thematic first, the aftermath of America's 9/11 was grippingly explored in Tanveer Khan's psychological drama Madhoshi starring Bipasha Basu and John Abraham. However, an inept and implausible end and poor marketing made the film come a cropper.

Dhoom, Murder and Masti all went on to become sequel franchises, Dhoom:2 and Dhoom:3 chalking up positions as the highest-grossing films of 2006 and 2013 respectively. Murder also has had two more instalments, the second one in 2011 being a huge hit, while Grand Masti (2013) emerged as the only adult content film to amass 100 crore-plus in domestic nett collections. Dhoom:3 became India's first and so far sole 300 crore-plus grosser. All these achievements thus came from brands that started out as 'normal' films in 2004!

Chameli saw Kareena Kapoor essay the bold role of a city prostitute, and her strong performance was appreciated. However, another significant aspect of the film was that it marked the debut of today's Numero Uno lyricist Irshad Kamil.

Priyanka Chopra, who had started out well in 2003, achieved a reputation for being a powerful actress with her vicious turn in Aitraaz. Saif Ali Khan etched out the first of his three superb blackguard acts in Ek Hasina Thi. Years later, he was to sign its director Sriram Raghavan for his home production Agent Vinod.

Three films of Akshay Kumar that were lying in cold storage - Police Force, Hatya - The Murder and Mere Biwi Ka Jawaab Nahin (Sridevi's last film from her first phase and also the last release of composers Laxmikant-Pyarelal) - made it to the theatres but went into oblivion within a week. Shah Rukh Khan too had an antique skeleton from his closet - Yeh Lamhe Judaai Ke.

Trivia hunters will also like the fact that Amitabh Bachchan acted in his second film (after the 1975 blockbuster) with the title Deewaar - though this time a suffix Let's Bring Our Heroes Home had to be added because of copyright issues. Udit Narayan sang for the first and only time for the mega-star in this film that co-starred Sanjay Dutt and Akshaye Khanna. Exactly 33 years earlier, Bachchan had acted with their respective fathers, Sunil Dutt and Vinod Khanna, in Reshma Aur Shera!