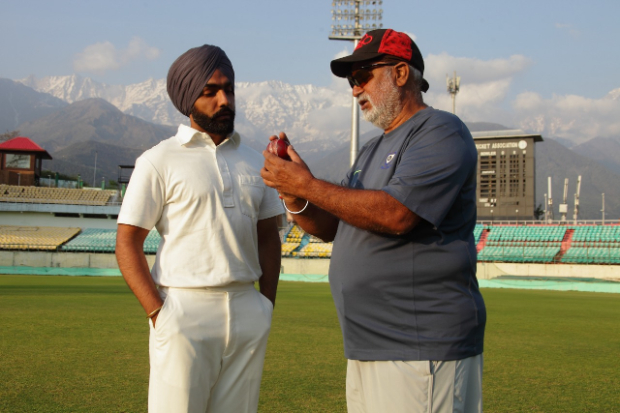 Ranveer Singh and team is preparing for their upcoming film '83 in Dharamshala. Ranveer and the whole squad is getting trained under legends themselves as Kapil Dev, Balwinder Singh Sandhu and Mohinder Amarnath share their guidance to the team.

A few days ago, Ranveer Singh shared a picture with Kapil Dev, the legend himself is training Ranveer and now the reel Balwinder Singh Sandhu (Ammy Virk) is being trained by the real one.

Directed by Kabir Khan, the sports film will bring to light one of the most important event in Indian cricket history. The film will be shot at real locations and will be going on floors early next year.

Shouldered by the then captain Kapil Dev, who led the Indian cricket team to it's maiden World Cup win, 1983's World Cup stays to be one of the most etched events in the minds of the cricket fans. '83 is slated to be released on April 10, 2020 in Hindi, Tamil and Telugu.

ALSO READ: ’83: Ranveer Singh is on top of the world, trains with Kabir Khan and team in Dharamshala

5 Years of Bajrangi Bhaijaan: Here’s how…

5 Years of Bajrangi Bhaijaan: When Kabir…