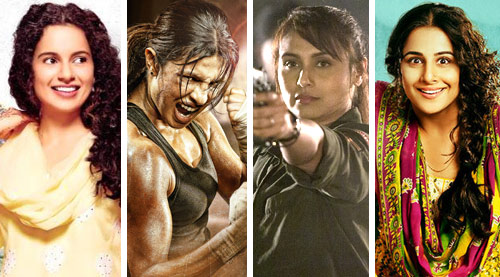 With many actresses claiming that there has been a drastic change in the way Bollywood is perceived of late, we believe that the year 2014 was lucky for many of them who got an opportunity to carry the film solely on their shoulders. Unlike hero/male oriented stories that are often hailed by masses, this time around, many top Bollywood actresses ruled hearts of many with their touching, sizzling and fairy tale stories.

Being one of the first releases of 2014, Queen started off slow due to its low key promotions. Produced by Phantom, this Vikas Bahl directorial, however gradually found its audience all over the country who could relate to the simplistic portrayal of Rani, a young to be bride from a small town. Probably, that's why Queen instantly managed to win hearts and became a milestone in Kangna Ranaut's career.

Considering that the film told the real life story of a five time Olympic champion MC Mary Kom and starred Priyanka Chopra, Mary Kom was a highly anticipated film. Priyanka's brilliant portrayal of the strong, ambitious and smart lady boxer, along with the film touching on some sensitive issues like women taking up boxing, the partiality towards North East Indians etc., got Mary Kom a lot of critical and mass appreciation.

After much speculation about her personal life, Rani Mukerji not only tied the knot with Aditya Chopra this year but immediately, post the wedding, she got busy with her comeback film Mardaani. With the rise of bright new celebrities, our senior actresses seem to find it difficult to re-establish themselves. However, Mardaani changed Rani's career, owing to her role as a strong headed cop. Though it reminded us of Rani's character in No One Killed Jessica, Mardaani traced a more realistic path by tackling issues related to the nexus of girl child trafficking. Coming from the stable of Yash Raj Films, Mardaani was also their only film which was not based on the backdrop of any romance, which added to the success of the film.

Vidya Balan is often known as the actress who can pull off any role without a support of an A-list male co-star. Despite, the fact that Bobby Jasoos failed to do well at the box office, we surely need to raise a toast for Dia Mirza and her husband Sahil Sangha's attempt to make a film that is solely based on a woman detective.

After her debut in Student Of the Year, Alia Bhatt was tagged as the glam girl of Bollywood, often compared to her senior Kareena Kapoor Khan. However, Alia proved that she wasn't just a glam girl but she had the potential and passion for acting, with Highway. The film that showcased a unique bond between a girl and her kidnapper, as she re-discovers the meaning of freedom after being kidnapped, established Alia as the true 'actress' of Bollywood. Amidst picturesque locales, Imitiaz Ali managed to tell a different story, deviating from complex, urban romance that he is known for.

While many may be wondering the reason behind adding this film to the list, let us tell you that Ragini MMS 2, had a single name 'Sunny Leone' that did wonders to the film at the box office. Ragini MMS 2 did fantabulous business in India owing to the fan following that Sunny Leone got with this film.

To make a debut in Bollywood, with a film that is riding solely on one's shoulder is a move worth appreciating. Surveen Chawla has given some big hits up North but Hate Story 2 was her first in Bollywood. Not only did she manage to shed her inhibitions for the bold scenes, but she also played the role of a strong headed woman driven by vengeance who keeps roaming about with a gun. Along with the quintessential Bollywood elements, Hate Story 2, surely rose up a few notches above the expectations.

It's a well known fact that Khoobsurat was a fairytale romance. The girl next door meets the charming Prince and they fall in love but it's undeniable that Sonam Kapoor managed to fit in this wacky, crazy role just perfect. Her 'bindass' attitude, her funky clothes, her idea of relationships, no matter how complicated, managed to raise eyebrows and the kind of curiousity which ultimately proved beneficial to the box office collections of the film.