The female of the species is pluckier than the male. 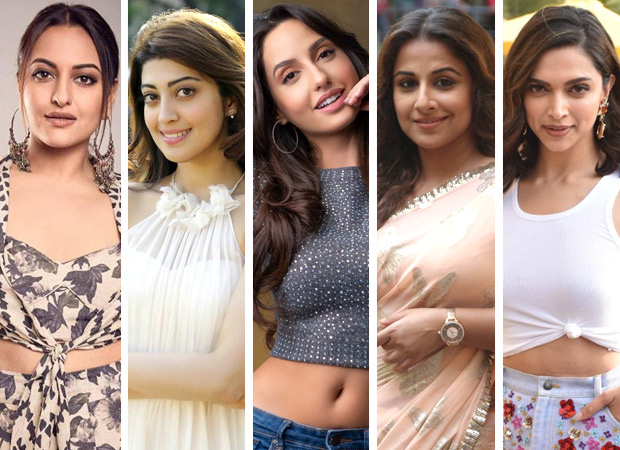 Remember Mother India, Bandini, Nagin, Amrapali, Main Tulsi Tere Aangan Ki, Chaalbaaz and more? In the last few years, we have got back to strong roles for women, as things were until the 1960s and in a limited way in the 1980s and early 1990s.

Today, however, most such films do not star top male stars, if at all there is a top hero. Unlike a rare Akshay Kumar who co-produces a female ensemble cast film in Mission Mangal, or the forthcoming Ajay Devgn movie Bhuj—The Pride Of India, a story of women who helped build a crucial airbase runway, that has Sonakshi Sinha, Pranitha Subhash from the South and Nora Fatehi, the ladies have to stick to debutant, small-time, struggling leading men or even character artistes as co-stars!

Today also, like with Meena Kumari, Nutan, Nargis or Nanda in the past, there are certain actresses who seem to be earmarked for female-centric roles, led by Vidya Balan (Ishqiya, Kahaani and its sequel, The Dirty Picture, Tumhari Sulu), Rani Mukerji again (the Mardaani franchise, Hichki), Kangana Ranaut (Tanu Weds Manu series, Queen), Taapsee Pannu (Naam Shabana, Badla despite Amitabh Bachchan, Mulk) and even Sonam Kapoor (though only Neerja worked).

A female-centric (earlier there was the term “woman-oriented”!) film thus usually means a movie without a hero, or at least a star hero. Priyanka Chopra’s Mary Kom, Jai GangaaJal and The Sky Is Pink and Deepika Padukone’s Chhapaak also fall into this category. 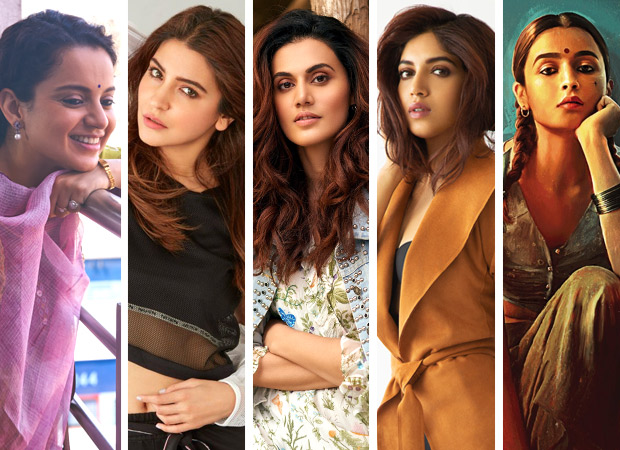 Most of the recent films, as we can see, have proved to be successful, off and on spawning a debate on the prices that the girls should command. Expectedly, we are still far from those days when top heroines drove a film regardless of heroes, or the times when Hema Malini, Rekha and even Sridevi and Madhuri Dixit commanded a higher status (and price) than some of their co-actors—stars or otherwise.

If we look at 2020, with its changed scenario of realistic entertainment and real sagas, we do see a further boost to such films. A few more mega-successes like Kahaani, Queen or Mardaani 2 and we never know where female star-centric movies’ budgets and returns will go.Let us look at the 13 substance-driven films coming up with heroines occupying center stage.

Panga: Releasing on January 24, flop-free director Ashwiny Iyer Tiwari makes her third female-centric saga after Nil Battey Sannata and Bareilly Ki Barfi. Kangana Ranaut plays a forgotten Kabaddi player, who is now a wife and mother. The aspiration-based fictional saga sees her return to the field, taking on societal pressures and even her age to win the panga (clash) between her renewed dream and circumstances.

A Biopic on Jhulan Goswami: Anushka Sharma features as Jhulan in this just-announced biopic. Jhulan is an all-rounder former captain of the Indian national women's cricket team who retired in August 2018. Particulars of the film are awaited

ShabhashMithu: Taapsee Pannu plays another female cricketer Mithali Raj, also captain of the Indian women’s national cricket team, who is regarded as one of the greatest batswomen ever, the highest run-scorer in women’s international cricket as the only female cricketer to surpass the 6,000-run mark in world one-day internationals. Detials are awaited of this film too, which Taapsee has reportedly accepted.

Durgavati: Akshay Kumar co-produces this “scary thriller” with Bhumi Pednekar and says that Bhumi was perfect for the simple, girl-next-door IPS officer’s role. Written and directed by G. Ashok, the film will go on floors by January, and is a remake of the Telugu Bhaagamathie.

Gangubai Kathiawadi: Sanjay Leela Bhansali’s ambitious film as producer-director-composer features Alia Bhatt after the shelved Inshallah. It is based on a chapter of Hussain Zaidi's book Mafia Queens of Mumbai about a brothel owner and matriarch. 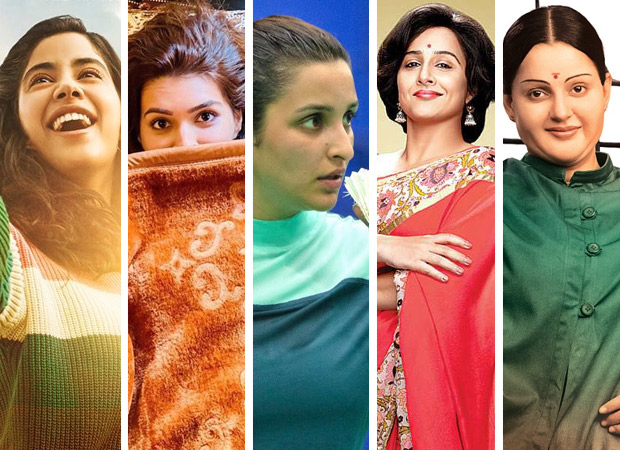 Gunjan Saxena: The Kargil Girl: Jahnvi Kapoor will get to explore her acting and action chops in this drama about the first female Indian Air-Force pilot in combat during the Kargil war. Karan Johar produces the film directed by newcomer Sharan Sharma.

Mimi: The original Marathi movie, Mala Aai Vhyaychaya was written and directed by the very lawyer who fought this exemplary case on surrogacy, and won the National Best Marathi Film award. This time, director Laxman Utekar shifts the story (and changes it considerably) to Rajasthan while retaining the core. Kriti Sanon plays the protagonist surrogate mother, who wants to be an actress.

Rashmi Rocket: This is the fictional story of an athlete from Guajrat who sprints as fast as a rocket. Taapsee Pannu is undergoing a physical transformation for this role. Akarsh Khurana directs the Ronnie Screwvala production

Saina: Amole Gupte’s biopic on Saina Nehwal, the badminton ace, was to star Shraddha Kapoor, but she had to leave the film due to date hassles. Parineeti Chopra, who came in, considers the role among her biggest challenges. It is a T-Series co-production.

Shakuntala: Vidya Balan (who else?) portrays the internationally famous Mathematics whiz. Sony Pictures Networks produces the Anu Menon directorial. At least the casting of the protagonist is bang-on!

Thalavi: Kangana Ranaut plays Jayalalithaa in this A.L. Vijay-directed film simultaneously made in Hindi, Tamil and Telugu. Kangana, it is said, insisted on this title for the Hindi version as well. Aravind Swami plays MGR.

The Girl On The Train: The mystery is directed by Ribhu Dasgupta and is an official remake of the 2016 Hollywood film of the same name, based on British author Paula Hawkins' novel, also named the same! Parineeti plays an alcoholic divorcee who gets embroiled in a missing person’s investigation. Aditi Rao Hydari and Kirti Kulkari lend principal support, with the latter playing an ardent cop.