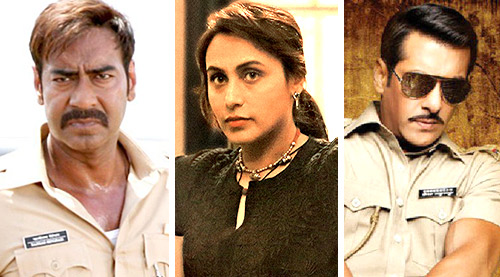 With Singham Returns and Mardaani making the cash registers ring and whirr in pleasure, it is time to unwind to the 10 best cops roles in Hindi films.

1.   Om Puri in Ardha Satya: He was a cop wracked by self-doubt unable to deal with the corruption that marks and mars the police force. Om Puri played the direct ancestor of Ajay Devgn in Singham, though far more furious flawed and self-destructive. Director Govind Nihalani now plans a sequel. The year was 1983, when the country was still seething under the ravages of the Emergency.


2.   Amitabh Bachchan in Zanjeer: But before Om there was Amitabh Bachchan playing the angry anti-establishment cop taking on the mafia. The film and its hero became the prototypes of all cop films to come. Recently, Ramcharan Teja the Telugu superstar reprised Bachchan's angry cop role, with disastrous results. Ram was in good company. Priyanka Chopra was equally disastrous in Jaya Bhaduri's role.


3.   Manoj Bajpayee in Shool (1999): E Niwas who recently resurfaced with the sobering comedy Total Siyappa once directed Manoj Bajpayee in this powerful story of an honest cop battling the mafia in a small Bihari town. This was a ruralized take on Zanjeer, powerful and poignant; Bajpayee could never equal the power and glory of this role ever again. Mr Bachchan had praised Manoj's performance as brilliant.


4.   Ajay Devgn in Gangaajal: Based on a true incident this cops story was story set in the Bihar hinterlands. Devgn who is arguably the most convincing cop in commercial cinema since Mr Bachchan played a tough cop out to cleanse a small town in Bihar run by goons and politicians. The language of storytelling was a highly potent mix of Govind Nihalani's Ardh Satya and Prakash Mehra's Zanjeer.


5.   Arshad Warsi in Sehar: A small film by a nearly unknown director Kabir Kaushik, Sehar told the story of an honest police officer taking on organized crime in Uttar Pradesh. Remarkably the film cast Arshad Warsi in a rare non-comic role. Many thought casting Warsi was suicidal for the film. But the director stuck to his guns.


6.   Sanjeev Kumar in Sholay: The valiant Thakur who loses both his hands in the call of duty....who can forget the legendary Sanjeev Kumar's gritty cop act which served as a sturdy counterpoint to Amjad Khan's dreaded Gabbar? Yeh act mujhe de de, Thakur.


7.   Dharmendra in Pratiggya: In the same year as Sholay (1975) Dharmendra was a riot as a fugitive who ends up masquerading as a cop in a village. Dharmendra regards it as his toughest role ever. See the film. You'll know why.


9.   Jimmy Sheirgil in Fugly:The film came and went. But the underrated Jimmy Sheirgil's cop act as the debauched Haryanvi act stood head and shoulder over the film. Jimmy rocked in khaki.


10.   Ajay Devgn in Singham & Singham Returns: Inspector Bajirao Singham gets very upset when faced with people who offer him bribes. He wants to eradicate corruption. Even if cars worth billions explode in his quest for a cleansed social system, Singham is okay with that. He builds a very scary storm in a tea 'cop'.


12.   Rani Mukerji in Mardaani: She is gritty, raw, earthy, determined and gutsy... busting a human trafficking racket Rani kills it like Jessica never did.