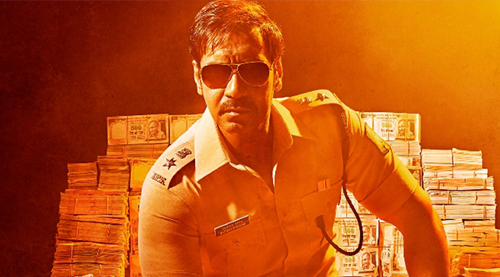 Singham Returns released this week and there are some understated gems that Bollywood Hungama would like to share with you!

1.   As a sign of protest, a cop can 'resign' by dropping his shirt into the hands of a Chief Minister. Hundreds of others would follow suit as well. However, they would continue to hold on to their service revolvers!


2.   If you want to bring on a funny conclusion to a rather serious state of affairs, it is okay to shoot the villains in their butts. That would invoke laughter and in the process water down all the tense moments!


3.   A truck would be hit strongly enough to be pushed down a river. However, despite thousands of crores worth currency notes in there, the baddies won't make one serious effort to retrieve them. Iss baar police pehle pahanchi!


4.   It is okay to incorporate heavy dose of Marathi into a film's narrative even if half of the dialogues are not even understood (or are rather irrelevant in the scheme of things). Well, all in the name of authenticity!


5.   It is okay for a reasonably well educated girl to actually whine around on not being told about an 'undercover mission' by her cop boyfriend, despite him explaining that no one is supposed to know about it


6. I  n a Hindi film, when a man just steps out of coma, he is simply asked to walk instead of being put on a wheel chair, leave aside being allowed to recuperate in the hospital. That, when he is a criminal being escorted to the court in a high profile case!


7.   In a Hindi film, there are still scenes (straight from the 60s and the 70s) when a man stands behind the curtains with just his shoes visible, hence leading to the case of mistaken identities. They invoked humor back then; they are reasonably successful in doing so even today


8.   The action could well move on from the much known roads of Goa to the unchartered territories in Mumbai. However, if there is anything with four wheels under it, Rohit Shetty will blow it up. No questions asked


9.   When a door is locked and it is tough for even Ajay Devgn to break it down, one can always rely on one man to do the job - Daya. No wonder, even Ajay screams - 'Daya, darwaaza thodo'