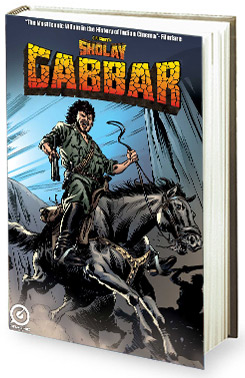 I was excited, really excited, on finding out that a couple of graphic novels on Sholay had just hit the stands. Though Yash Raj had also tried that with Ek Tha Tiger and Saif Ali Khan too went ahead with designing one for Agent Vinod, the trend has somehow not picked when it comes to Bollywood being the source of inspiration for designers of graphic novels. Hence, when the 'baap' of all movies, Sholay, was the chose subject, I truly believed that here would be something landmark in the offering. Moreover, since one of the novels was entirely dedicated on the genesis of 'Gabbar', it was time for celebration.

As it turned out though, I had mixed emotions after being through with the two novels. While the print quality, animation, styling, design and language is impeccable, there is hardly anything new that is in the offering in terms of nuances, especially in the novel which is centered on bringing Sholay from screen to print. There is absolutely nothing that has been added to the original script here, what with dialogues too being almost verbatim translated from Hindi to English. Agreed that the basic script had to be kept intact but then a nudge here or there and a few different dialogues would have really helped the cause.

None of that happens here and what further jars is the fact that since this a graphic novel format, it is a highly edited version of Sholay which is up for display. So while the Sippys have presented this book as a gift to those who have seen Sholay and even those who haven't, the fact remains that the fans would find it shallow whereas the ones who are being exposed to this legendary tale by Ramesh Sippy would end up wondering what the fuss is all about.

No wonder, one ends up missing the character detailing, something that was the core of Sholay when it had released four decades back. Really, a thicker novel would have done the trick and considering the kind of cult following that Sholay, one wouldn't have minded more material at disposal to go through. What works though is the animation which is classy indeed and makes the novel accessible to a much wider reader base, both nationally as well as internationally. Perhaps that was the aim too when the whole concept was being put together, which is to cut across boundaries. But then why not make it really large?

On the other hand what is much better is the novel which is focused entirely on 'Gabbar'. It pretty much details the origin of the much dreaded character and brings it to life, what with the back story being told when he was just a kid. You get really pulled into the situations which are on display as it is revealed how Gabbar came from a humble background and was forced to take on the route of crime. It is also interesting to know how Sambha came into Gabbar's life and the episodes that lead to this and follow it up are very engaging, exciting and above all, totally filmy.

This is the reason my grouse it that the story just doesn't go on for a longer duration. Just when you are through with half the novel, the story of Gabbar ends. Now if that's not disappointing enough, what further takes the charm away from the book are some shorts that are told about Jai, Veeru, Thakur, Soorma and even Mehbooba. An attempt is made to bring on some back stories into play but they don't really work. This isn't all as a comic strip or two for children is also thrown it but to not too much effect. As for the pages dedicated to sketches, they are mainly for academic interest.

Having said that, good credit must go to the team for making an effort at least by trying to bring in new experience for a reader. The detailing may not be as strong and superb as 'Agent Vinod - The Jungfrau Encounter' while the fun element is also a tad behind (though the story of 'Gabbar' is indeed well told). Still, for those who truly want to treasure a tale in a different format by obtaining and book and relive the nostalgia, the two graphic novels are not a bad deal.