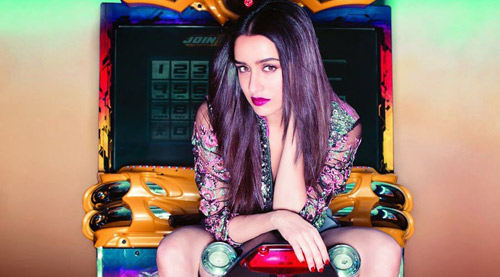 1. Shraddha Kapoor comes from a family of singers. 'The Goddess Of Melody' Lata Mangeshkar is her relative. Coincidentally, Shraddha played a singer and Lataji's bhakt in Aashiqui 2.


2. After an inglorious career start in Teen Patti, Shraddha was shown the door out of several projects including Sanjay Leela Bhansali's My Friend Pinto. Pinito's leading man Prateik Babbar took Shraddha to Bhansali. She was chosen and then rejected in favour of Kalki Koechlin.


3. Years later, after Aashiqui 2 and stardom, she all but signed Sanjay Bhansali's Gabbar Is Back and then backed out, citing dates as a reason. But was it sweet revenge?


4. Did Aashiqui 2 against all odds. Was offered Yashraj Films' Aurangzeb at the same time. Turned it down as she didn't want to adhere to the Aditya Chopra School Of Bikini Stardom. The role she turned down went to Salma Agha's daughter Sasha .The rest, as they say, is hysteria.


5. Said to be in a relationship with her Aashiqui 2 co-star Aditya Roy Kapur. Neither of them ever confirmed the rumours.


6. Father Shakti Kapoor and mother Shivangi wanted Shraddha to pursue studies. But Shraddha was determined to be an actress.


7. Loves her parents but adores her brother Siddhanth even more. Shraddha's secret sorrow: that her kid-brother's career has not taken off. She can seek solace in Sonakshi Sinha's siblings' non-happening careers.


8. Shraddha Kapoor is eternally indebted to Mohit Suri for giving her such a career-defining break in Aashiqui 2. Did Suri's Ek Villain and was heartbroken when Vidya Balan was signed to play the female protagonist Vasudha in Hamari Adhuri Kahani. However, Shraddha did get a chance to play a character named Vasudha in Punit Malhotra's fiasco Gori Tere Pyar Mein.


9. Shraddha Kapoor did guest appearances in two Karan Johar productions Gori Tere Pyar Mein and Ungli in the hope of landing up a lead role. Silly girl, Didn't she see what happened to Katrina Kaif even after Chikni Chameli? Special appearances don't lead to leads in Johar's world.


10. In her new film ABCD 2, Shraddha Kapoor worked hard to master her new dance steps, got repeatedly injured and finally came out as good as her co-star Varun Dhawan. Shraddha can't take a no for an answer. Even when challenged by her own self.

Sanya Malhotra opens up about lovemaking…