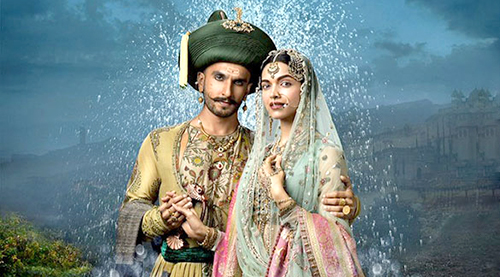 1. Sanjay Leela Bhansali has never attempted a historical before. True, Devdas looked epic and was designed to seem glorious in its periodicity, but the characters were

all fictitious in not just Devdas but all of Bhansali's films so far.


2. The filmmaker conceived Bajirao Mastani even before he directed his first film Khamoshi: The Musical. SLB and Salman, best of friends at that time, spent hours discussing costumes,


3. After the Aishwarya-Salman pair became untenable, Salman wanted his buddy SLB to cast Katrina Kaif as Mastani. In fact Salman personally took Katrina to SLB's home and introduced her to the

director saying, 'This is your Mastani.' Some things are not meant to be. We can imagine Katrina on a horse. But can we imagine her speaking those caste Hindi-Urdu lines? (Moral of the Story: You

can take the horse to the water. But you can't make it drink the water)


4. In 2003 SLB decided to make Bajirao Mastani with Salman, Kareena. Salman recommended Bhumika Chawla as Bajirao's first wife. SLB did a screen test of Bhumika where, lamentably, her saree

caught fire in the diya (I was present at scene of the bizarre mishap). No damage was done. That ended Ms Chawla's audition on an unfavourable note.


5. Soon after the Salman-Kareena jodi fell through. Salman coaxed Kareena to sign Priyadarshan's Kyun Ki (a clumsy convoluted remake of One Flew Over The Cuckoo's Nest), thereby

killing the novelty of Bajirao Mastani.


6. 12 Years later SLB revived the project. His choice this time for Bajirao? Ajay Devgn, because of the Maharashtrian backdrop. But Ajay asked for a fee that, according to insiders, was staggering.

7. Ranveer Singh got the role by default. During the making of Goliyon Ki Raaslila Ram Leela SLB was not sure if Ranveer's ebullience would translate into the warrior's internalized

aggression. But Ranveer's dedication convinced SLB. The two got on like a house on fire.


8. Deepika and SLB share the same unspoken bond as Aishwarya and the director. He just has to think a shot and the two actresses would act it out.


9. The popular hand movements in the Pinga dance were borrowed from SLB's faithful, cook and house help whom he calls Maasi. Like a lot of women in SLB's life Maasi loves to

break into a song and dance.


10. There will be a disclaimer at the start of the 2 hour 25 minute film stating the extent of historical authenticity of the characters, to appease the protesters.