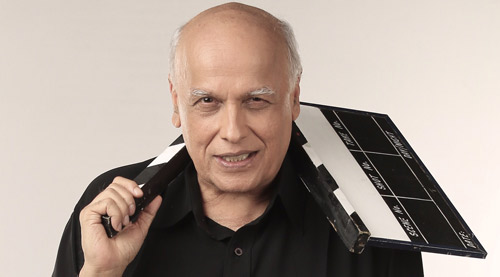 Don't ask me why, but when I saw the image of Dilip Saab receiving the Padma Vibhushan Award from the hand of Sri Rajnath Singh, Union Home Minister, in the presence of his proud wife, Saira jee and a beaming Devendra Phadnavis, along with the Governor of Maharashtra, Sri Vidya Sagar Rao, I was reminded of what the thespian had said to me after I had conducted a memorable interview with the legend in Bradford, way back in 2004 during the famous Bite The Mango Film Festival. Dilip Saab had decided to ignore the Shiv Sena's dictat, and keep the Nishaan-E-Imtiaz, Pakistan's highest civilian award bestowed upon him by Islamabad, for his contribution to better Indo Pak understanding. He was able to brave the opposition at home, and take all those people who were questioning his allegiance to this country head on, because of the support of the then PM Atal Bihari Vajpayee, who had declared without mincing his words, that there was no doubt about Dilip Kumar's patriotism and commitment to the nation.

Dilip Saab had categorically mentioned in his letter to the Prime Minister that he was ready to return this prestigious award if Vajpayee felt that doing so would serve the national interest. It is Atal Bihari Vajpayee who needs to be thanked for firmly standing behind this King of Kings and making a historic trip possible. 'We stars are used to being revered by all kinds of people, but what happened in Pakistan when I went to receive the award is something that you have to hear Mahesh,' Dilip Saab said to me. Dilip Saab was supposed to meet Nawaz Sharif, who was also the Prime Minister of Pakistan at that time. As is customary, he had contacted the office of the PM to find out what time they should arrive there, to enable to smoothly sail through the security in order to be on time to meet the PM. 'What I was then told humbled me,' said Dilip Saab. 'Imagine my surprise when I was informed by his office that it was not me who was to come to the PM's office, but that the PM was coming to meet me!' Navaz Sharif then arrived to meet Dilip Kumar with his entourage, and sat down for over an hour, with the humility and childlike eagerness of a true fan of the thespian. This self-effacing attribute of PM Navaz Sharif left me awestruck. It dawned on me that simple human gestures of leaders of state resonate far beyond the work that they may do in their official capacity. By honoring this great actor who has been the reference point for the Hindi film industry for the last sixty years, Navaz Sharif had come closer to those millions of people who have cried, laughed and applauded this great actor in the darkness of auditoriums all over the world.

'Sir, I love you for loving my hero,' I said to Navaz Sharif when I had gone to meet him in his palatial house on the outskirts of Lahore, as part of a peace delegation a few years ago. With a warm smile he said to me 'Why don't you bring Dilip Saab here and you too join us and spend at least a month with us and enjoy our hospitality', he offered graciously. He was not in power then. It is his love for his icon that made Navaz Sharif declare Dilip Saab's house in Qissa Khwani Bazaar, Peshawar, where he was born, a national heritage property. This was indeed the highest tribute that any actor could have received from the head of State of a country that is so much a part of our shared heritage and yet looked upon with animosity by those who propagate the politics of hate. I recall that on that historic occasion, Saira jee with tears of joy in her eyes, had said, 'It would be wonderful if our Government too would acknowledge his contribution.' The thirsty know that real thirst draws out water from a parched and empty sky. The prayer which had emanated from Saira Jee's heart has found its answer today. PM Narendra Modi has warmed the hearts of millions of Indians all over the world by sending his emissaries to Dilip Saab's abode, to give him his much-deserved award. Too little too late? No way. Better late than never! Thank you Mr. Modi for loving our hero.