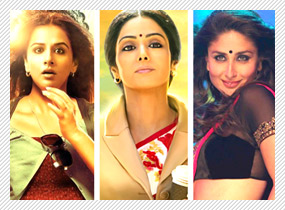 Kahaani (2012): Now the kahaani can be told. Vidya Balan pretended to be pregnant all through this film. Her final denudation of the artificial baby bump at the end signified how far the heroine's image had come in our film. In Kahaani, Vidya and Kolkata were the heroes. Bangla star Parambrata Chatterjee joked he was the heroine of Kahaani. Some years ago, Shilpa Shetty had played the 'hero' of Phir Milenge while Abhishek Bachchan and Salman Khan sportingly stepped in to be cast opposite her. Times, they are a-changing. Sujoy Ghosh wrote Kahaani specially for Vidya and even named the protagonist after the actress.

Fashion (2008): Madhur Bhandarkar's hard-hitting saga of a small-town girl's rise as a super-model and then the tripping over drugs and the fall...Priyanka Chopra's career-best performance matched only by her brilliance in Barfi. She lives out the model's dreams, nightmares and ambitions with a conviction that scoffs at the artifice that defines the glamour world. Chopra was so hot in the film she made her co-star Arjan Bajwa look like a lost kid in her presence.

English Vinglish (2012): Sridevi's comeback film released during the same year as Vidya Balan's Kahaani featured the 50-year old actress as a housewife on a journey of self-realization. Debutant director Gauri Shinde was obviously a crazy Sri fan. That helped. Sadly no other film since then has found place for Sridevi's indomitable talent.

Heroine (2012): This film did not set the boxoffice on fire as it was expected to, but Kareena Kapoor's descent into a cocaine-sniffingnevous wreck of a movie star was stark raw and moving. Too bad, director Bhandarkar seemed to be making Fashion all over again. Kareena, though still, has a lot to give to the camera.

The Namesake (2007): Aushima Ganguly, stranded in the US after her husband's death, shakes and weeps uncontrollably ...that one sequence defined Tabu's impressive ability to shoulder films with the aplomb that her aunt Shabana showed throughout the 1970s and 80s. Tabu had the the makings of another Shabana. Her histrionics today however seem outdated when pitched against Parineeti Chopra and Alia Bhatt's zest for excellence.

Water (2005): Deepa Mehta named her incandescent heroine Kalyani after the timeless Nutan in Bandini. And Lisa Ray as the new-age Kalyani in this tale of forbidden love between a widow and a social reformist did not let her namesake down.

Black (2005): Rani Mukerji's proudest moment. As a deaf and mute girl, who climbs over every mountain to reach her goal, Rani's performance in this Sanjay Leela Bhansali film was bravura and inspirational. She swept the awards and made her name as an actress who can be relied on to excel in author-backed role. Her personal association with the Yash Raj banner has cost Rani plum roles in outside productions. After a disastrous heroine-oriented turn in Aiyya, she will again be seen in a author-backed role in Mardaani.

That Girl In Yellow Boots (2011): Kalki Koechlin's made-to-order role as foreigner trying to make a decent living in Mumbai through underhand means in a massage parlour was a portrait of peril under pressure. She seemed to not act at all. And boy, that is quite something.

Queen (2014): Rani gets jilted at the altar and decides to alter her life irreversibly. Kangna Ranaut's interpretation of a girl's journey through darkness into the light is so bouncy, bubbly and burnished, you want to stand and applaud this film about a small-town Indian girl's journey into self-realization. Yup, girl-power lives on in our movies.