B-town is currently in an exciting phase with a rising brigade of fashion stylists at the helm of affairs for the actors and actresses. While their sartorial moments may render us spellbound, they often land up in the pit called as weekly worst dressed, courtesy their not so sartorial moments. While some tinsel town celebs have aced the art of flaunting it all with an enviable panache, what happens when the usually best-dressed celebrities of tinsel town make some cringe-worthy choices or go OTT? Epic style fails that ensue, courtesy their fashion stylists whose style interpretation fails to evoke a wow. This week, the celebs, who stepped on the wrong side of the fashion included Sonam Kapoor, Deepika Padukone, Aishwarya Rai Bachchan, Parineeti Chopra and Hina Khan.

Some of these celebs are known to maintain a steady pace of classy styles but in a bid to be experimental; their looks often evoke a flurry of memes and wrath of the fashion police. The style choices of this week’s worst dressed celebs clearly lacked novelty and were replete with unflattering colours, fabrics and silhouettes. Curious, much? Delve in more to know how some looks failed to work for these stunning stars. 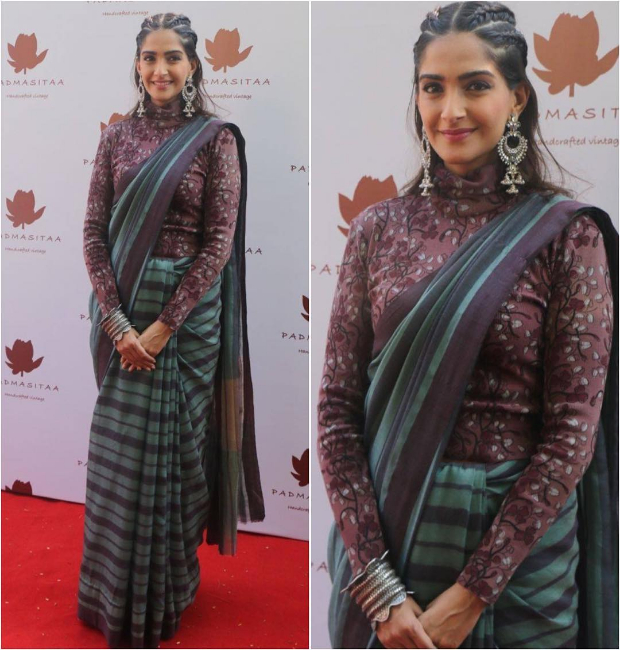 Styled by Rhea Kapoor, Sonam Kapoor aimed to nail the neo-chic vibe with an Anavila horizontal striped saree teamed with a printed long-sleeved blouse. Silver oxidised jewellery from Purab Paschim was a worthy addition. The cornrows inspired braided half-updo is a clash of multiple elements bundled in just one look! Sonam Kapoor shows us exactly what a classic case of over-styling looks like! (Also Read: Whoa! Sonam Kapoor exudes a glamorous power play in black on the 63rd Jio Filmfare Awards 2018 red carpet!) 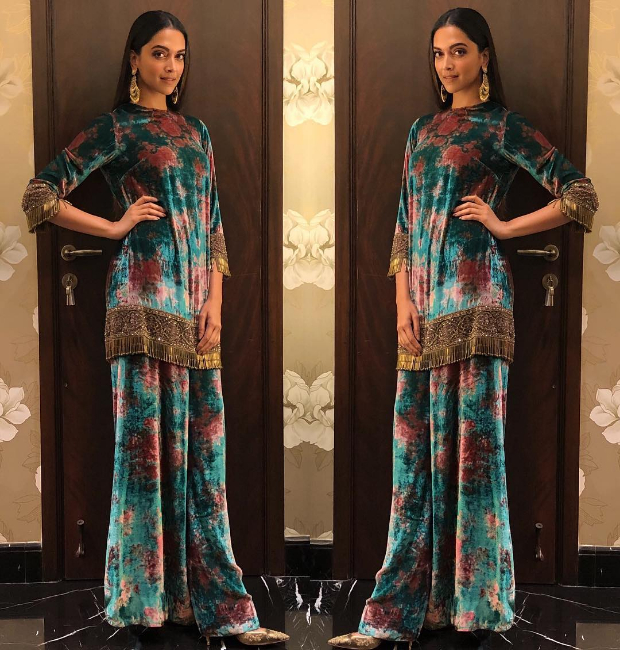 Playing muse to her favourite designer, Sabyasachi, Deepika Padukone went for a top-to-toe velvety look. Donning a hand-printed lounge kurta pyjama with beaded tassels inspired by the 1920s and paired with Christian Louboutin x Sabyasachi collaboration heels, Deepika Padukone was styled by Shaleena Nathani. She topped off the look with statement earrings from Tanishq and opted to leave her long tresses open with centre-parting. An uninspiring look with an overkill of velvet, Deepika Padukone’s style offering left us disappointed, especially after tow back to back ethereal ethnic looks. (Also Read: Whoa! Did you know Deepika Padukone wore 14 gorgeous jewels in the song ‘Ek Dil Ek Jaan’ in Padmaavat! Read the exclusive deets RIGHT HERE!) 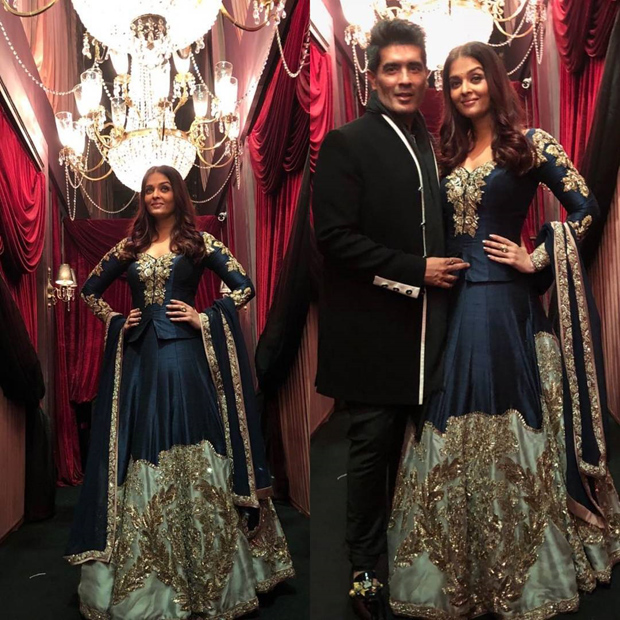 Gracing the red carpet of the HT Most Stylish Awards 2018, Aishwarya Rai Bachchan may have clinched the Timeless Style Diva Award. She had donned a black Manish Malhotra embroidered and embellished black-gold creation and teamed it with loose waves and subtle makeup  An unimpressive avatar and a tad boring, if only Aishwarya Rai Bachchan had opted for something worthy enough to accentuate her stunning and timeless beauty. (Also Read: Fanney Khan makers rubbish rumours of Aishwarya Rai Bachchan being upset with R Madhavan’s casting) 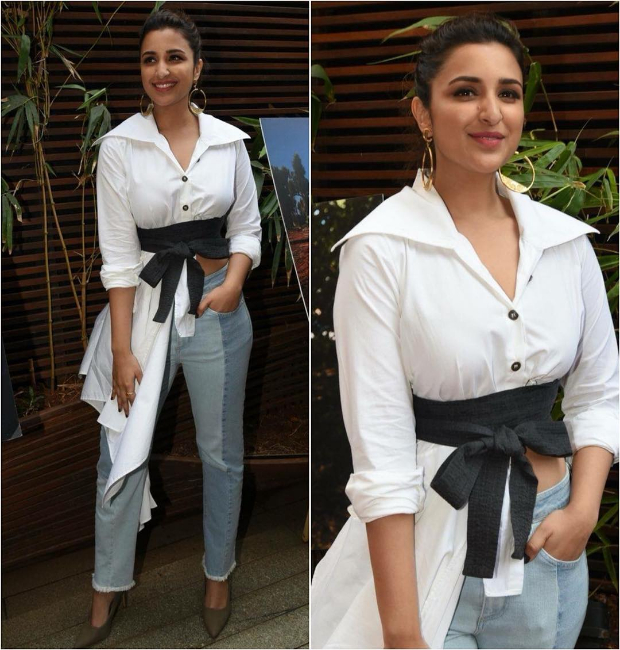 Gracing the event as an ambassador for Australian tourism, Parineeti Chopra was styled by Sanjana Batra. She teamed a white high-collar shirt with side panels from Chola The Label with dual toned patchwork denim from French Connection. A pair of large hoops from The Flower Child by Shaheen Abbas coupled with a subtle makeup and tied hairdo rounded out the look. While the shirt is certainly a swanky upgrade to the classic white shirt, we wish Parineeti had opted for a pair of snug tapered denim instead of the ill-fitting ones. A clash of the shirt with the denim is certainly what spoiled her look! 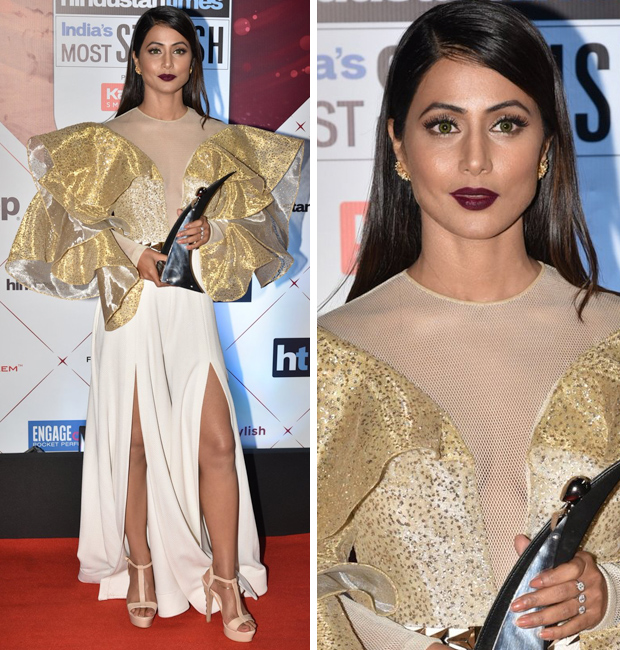 The Bigg Boss 11 finalist, Hina Khan may have lost the trophy to arch-rival, Shila Shinde but clinched the Most Stylish TV personality award at the HT Most Stylish Awards 2018. The actress donned a white and gold gown with sheer and voluminous sleeves and slit with dark lips and a sleek hairdo rounding out the look. A tad overkill, courtesy the lips, the sheer and the sleeves, we wish Hina had toned out at least one element to elevate her look.

The style choices of these B-town celebs failed to cater to our sensibilities and we wish they turn the tables in their favour soon enough! Do let us know your take on your beloved celeb’s style moves and until then stay tuned to Bollywood Hungama Fashion and stay tuned!