We know one thing for sure about our Desi Girl, Priyanka Chopra that there is never a dull moment in her life! We say so because the diva has been living the glorious American dream to the hilt! She has not only upped her fashion game but continues to achieve sartorial perfection every time she steps out. Well, continuing her tryst with the glamorous red carpet offerings, the Quantico star, Priyanka walked the red carpet of the Clive Davis’ Pre-Grammy’s 2018 party over the weekend. Needless to say, Priyanka upped the glamour quotient with a mean ensemble and pulled it off with a meaner aplomb making everyone gawk in renewed awe! With feted fashion stylist Cristina Ehrlich meticulously styling Priyanka, the duo never shy from raising a sassy storm.  Rising high and making us prouder than ever with her achievements, the former Miss World, Priyanka is raring to go with next big Hollywood flick, A Kid Like Jake. The movie was premiered at the prestigious Sundance Film Festival last week. Going all out and engaging us with her spunky ensembles, Priyanka embodies effortless chic and there are just no two ways about this! The diva clinched the title of the Sexiest Red Carpet Look from the What is Sexy list of Victoria’s Secret in 2017 that stands testimony to this fact.

If 2017 saw Priyanka #KillIt with her glorious looks at the Golden Globe Awards 2017, Oscars 2017, People’s Choice Awards 2017, Met Gala 2017, Baywatch promotions, 2018 promises to be another year of her torrid love affair with the red carpet. Reclaiming the undeniable tag of being a red carpet trailblazer for the umpteenth time, here’s the style dope on Priyanka Chopra’s cheeky take on laidback fashion…

Priyanka Chopra – Less is more and how! 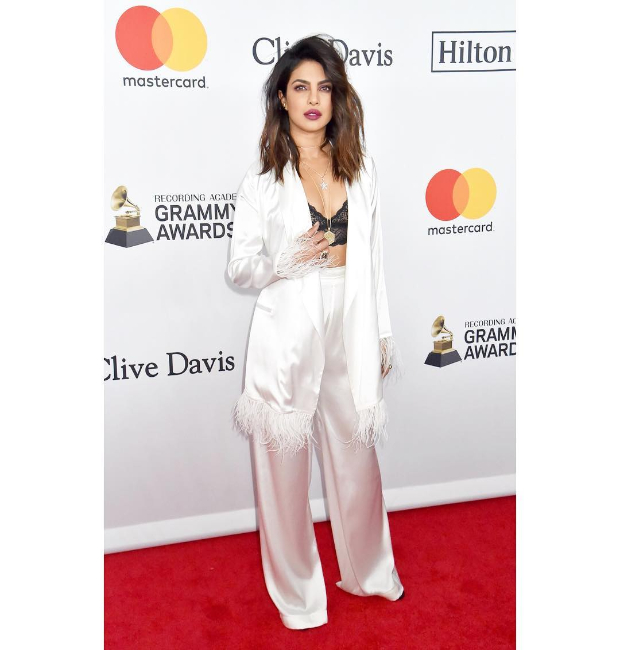 Priyanka sported a white silk feather robe and wide leg pant from the SS’18 Collection of the Moscow based designer, Ester Abner with a lacy black bralette and open-toed sandals from Giuseppe Zanotti. (Also Read: Anything with camouflage can be awesome, Priyanka Chopra shows you how all the way from the Sundance Film Festival 2018!) 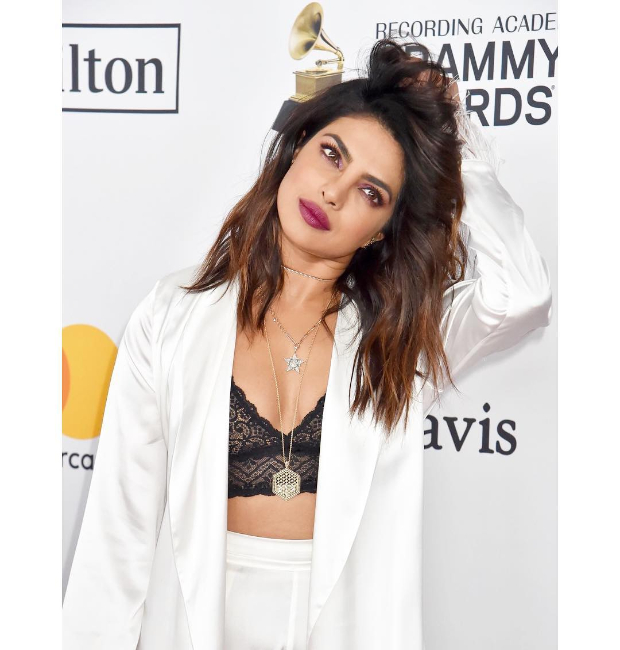 She accessorised her look with jewellery of delicate studs, a layered choker and rings from Ara Vartanian, Kismet by Milka and Roule & Co. (Also Read: Uh, nothing! Priyanka Chopra has been just turning NYC into her own little personal runway!) 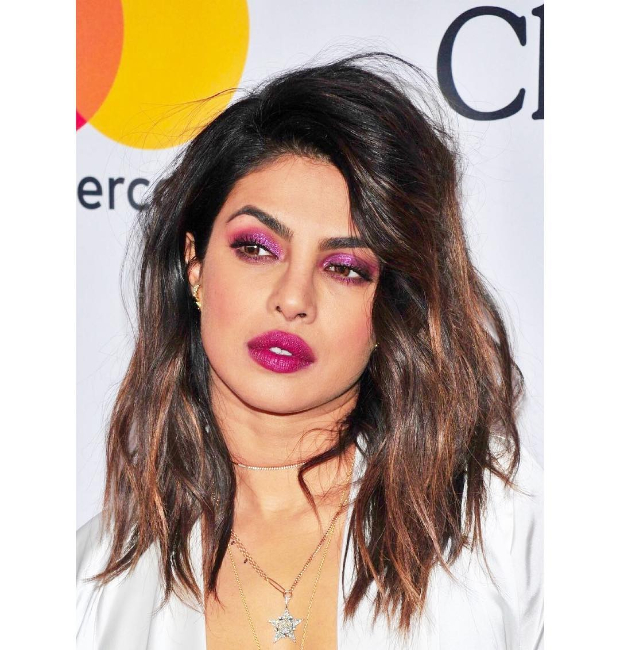 The diva roped in a smashing beauty game in the Pantone colour of the year – ultraviolet for her eyes and lips with highlighted cheekbones courtesy makeup artist Daniel Martin. (Also Read: Priyanka Chopra stirs up a sassy storm with her quirky ensembles at the Sundance Film Festival 2018 for A Kid Like Jake!) 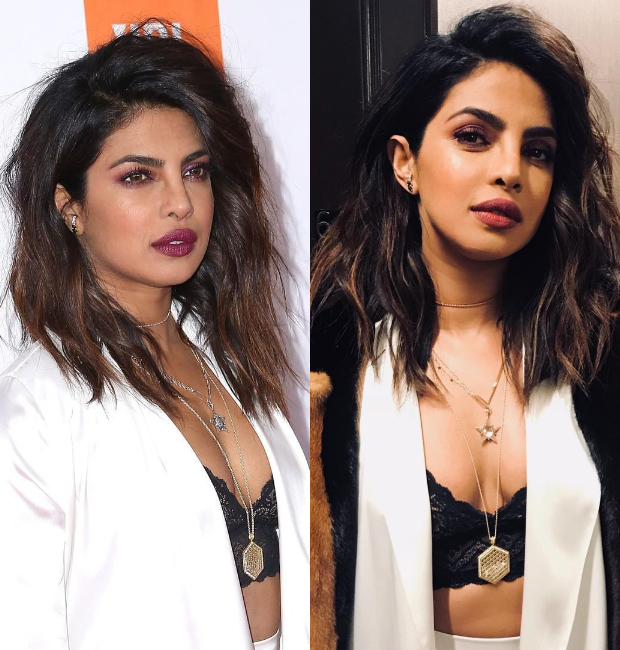 Celebrity hairstylist Own Gould gave Priyanka a stunning look of messy textured waves with a side parting. 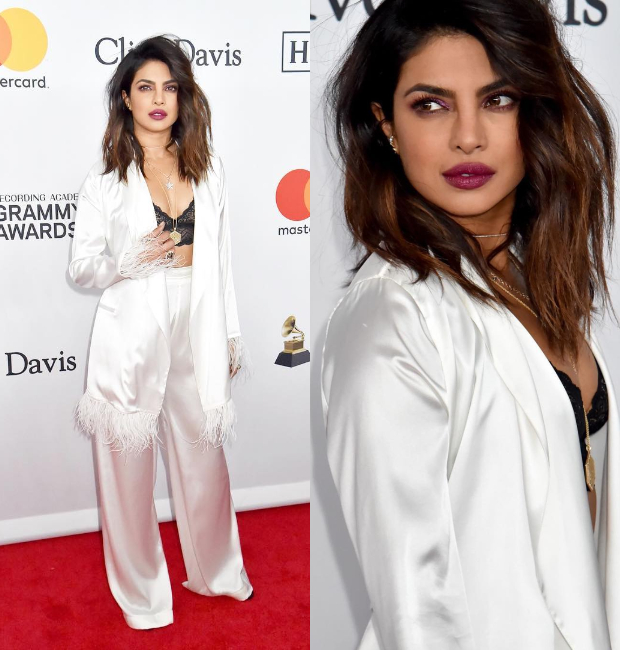 Phew! Could she get any hotter is what we wonder?! Achieving perfection in her red carpet looks is something that even the most beautiful women in Hollywood strive to; Priyanka does so effortlessly and makes heads turn!  Additionally, Priyanka sets sartorial benchmarks all the time! Working off the laidback look and channelling the less is more vibe, Priyanka added oodles of glamour with a stunning beauty game in tow. Giving the conventional red carpet gowns and dresses a miss for a relaxed fit silhouette, Priyanka is striding the style boundaries with this look! (Also Read: Sundance Festival 2018: Priyanka Chopra joins Claire Danes, Jim Parsons and Leo James for the premiere of A Kid Like Jake) 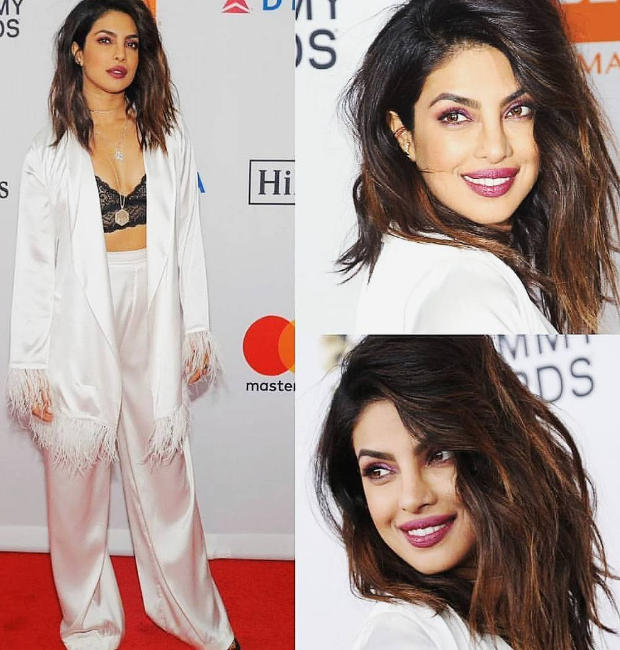 Relaxed fit and patterned separates are a big rage in the celebrity sphere with eminent celebs like Zendaya and the Hadid sisters making viable as a chic streetwear and a glamorous red-carpet wear. Wearing an enviable aplomb on her fashionable sleeve, Priyanka Chopra joined the cooler ranks of this fashion trend by opting for a demure colour but upping the look with a brilliant makeup and oodles of jewellery. (Also Read: Check out: Priyanka Chopra gets ready to make Oscars nominations 2018 announcement) 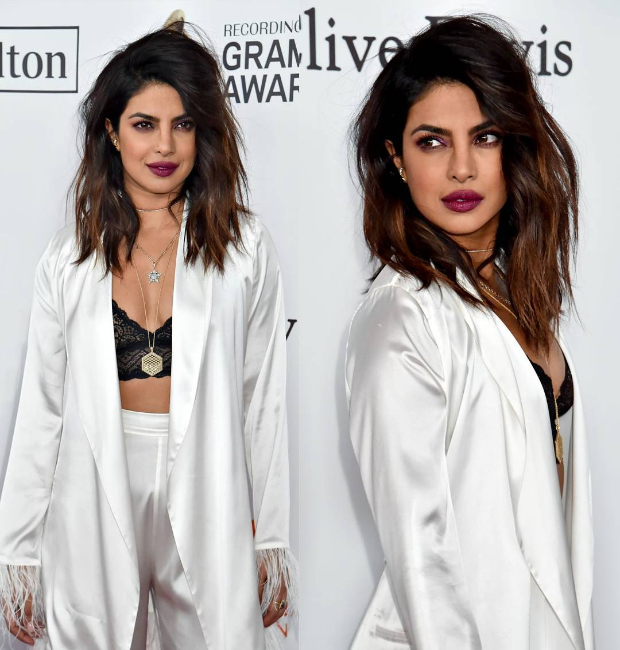 Priyanka Chopra has regaled the global audiences with her gun trotting, high on drama and racy role of Alex Parrish in ABC’s Quantico. She will reprise this famed role for Quantico 3 in April. Dazzling everyone with her easy smile, infectious laughter, sass, wit and charm coupled with an affable nature, Priyanka is a delight and has the world wrapped around her little finger like nobody else would.