The trio of Varun Dhawan, Shraddha Kapoor and Prabhudeva got back for Remo D’souza’s Street Dancer 3D. The dance-drama, which opened today, has taken a below par start at the box-office as the early estimates suggest opening day collections in the range of Rs. 9.25 to 10.25 crores. The number has come across as a shock as the general opening day prediction of the trade was in the range of 13 to 15 crores, considering the last collaboration of the same team, ABCD 2, had raked in collections around the 14.3 crore mark back in 2015. 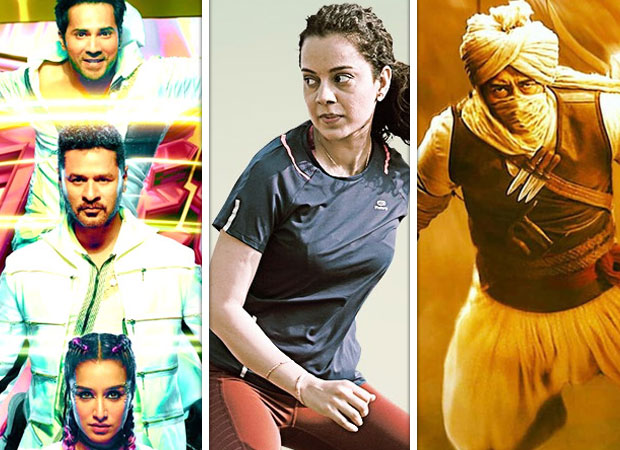 One expected the youth to come in support of the film in spot bookings taking into account the genre and star-cast. The film has recorded poor collections all across be it a metropolitan city like Mumbai or a mass belt like Bihar. The Maharashtra belt would have fared a little better, however Ajay Devgn’s Tanhaji was a major opposition running almost neck to neck with Street Dancer even on its third Friday. Surprisingly, the occupancy at mass belt is lower than a film like Marjaavaan, which featured Sidharth Malhotra in lead. The reports are fairly positive, however with this start, it needs a big turnaround on Saturday and Sunday to put up even a “decent” weekend total and record a healthy trend on the weekdays. Ideally, the opening should have been a lot better for a film that’s as front-loaded as Street Dancer.

The second release of the week, Panga starring Kangana Ranaut has also taken a poor start at the box-office as the early estimates suggests collections around the 2.25 to 3.25 crore mark. The reviews and reports are positive, but it has been near no show for the film at the theaters, however one is hopeful of the biz to double up on Saturday and jump even better on Sunday thereby getting closer to the double digit weekend total. It’s has recorded horrible occupancy all across, but Delhi and Punjab are comparatively better due to the local flavour. The Ashwiny Iyer Tiwari directorial needs a massive upward turn from here on otherwise it would end up collecting even lower than the recently released dud, Deepika Padukone’s Chhapaak. The weekend trend will give a clear idea about the verdict but at the moment, the film is in the grey area. The general day one expectation was closer to the 4 crore mark.

Tanhaji has continued with its terrific run as the film has collected 5 crore plus on its third Friday thereby entering the 200 crore club. The film is running riot in Maharashtra and the Republic Day collections stand a chance to touch the double digit and take the Ajay Devgn starrer closer to the 250 crore mark.