2020 started with a bang and was expected to be the year that Bollywood films would set new benchmarks at the box office. With new markets opening up, trade expectations were that Indian films could see an increase in revenues propelling filmmaking to the next level. However, contrary to expectations the first three months have been rather bleak for the industry, the recent financial crisis with Yes Bank, and the currently on going Coronavirus scare that has sent the nation into a lockdown. In this analysis we take a look at the box office report card of Bollywood to analyse how much the industry has suffered from the current events. 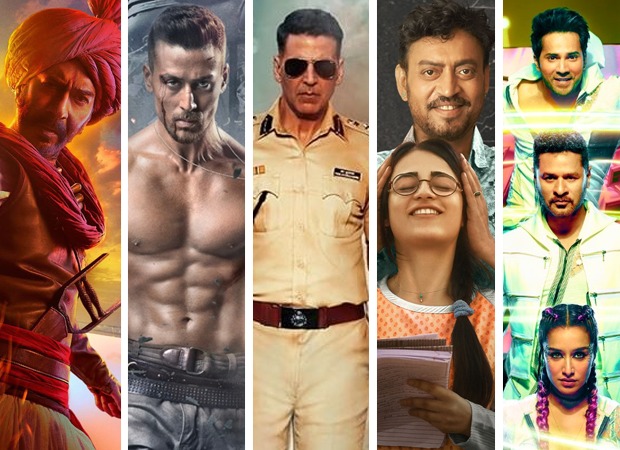 In fact, the first quarter of 2020 has seen Bollywood rake in approximately Rs. 778 cr. with a major chunk of collections coming from the Ajay Devgn starrer Tanhaji: The Unsung Warrior that drew in triple digits and Baaghi 3 that fell short of a century due to unseen circumstances. If that wasn’t all, the Coronavirus scare that has put the nation in lockdown also forced the postponement of releases like Sooryavanshi which ideally could have added around Rs. 170 cr. to the total box office tally in the final week of March. The other films to suffer greatly from the Covid-19 pandemic are Baaghi 3 and Angrezi Medium. While the first fell short of the anticipated collections by Rs. 40 cr, the other release Angrezi Medium was affected the most with theatres shutting down, the film that was expected to rake in well over Rs. 30 cr saw just Rs. 9.36 cr coming in.

Shedding light on the first quarter Amod Mehra states that given how tumultuous the year was, it was a rather bleak start. However, he is quick to reaffirm that films cannot be written off totally, while also pointing out that unlike previous years the first three months of 2020 featured very few releases. “If you look at previous years there have been films which featured big star names like Shah Rukh Khan, Salman Khan, Akshay Kumar and so on, but in 2020 the first quarter saw releases of smaller celebrities so obviously the box office collections would differ.”

Trade Analyst Girish Johar doesn’t mince words when talking about the first quarter of 2020 when he says, “The first quarter has gone for a toss that is evident. As for the second quarter, basis on what the government declares, things will take time to get back on track. In fact, things like getting artist dates, locations, set ups in place will take at least two to three weeks, after the government relaxes the embargo.”

“I had tweeted as well that we have lost around Rs. 400-500 cr. in the first quarter, but that is majorly because of the Corona thing, but an equal contributor is the quality of the content. It is not like a good film has come and the audience has missed out on it. It is the content quality of the films that have come, like Baaghi 3 took a good start but in its second week there was a drastic drop in collections due to content and Corona, even ABCD 3D did decently well but eventually its collections as well dropped”, reasons Johar when detailing what went wrong in the first quarter of 2020.

Echoing a similar view films trade analyst Taran Adarsh too states that the first quarter of 2020 was rather dull, “The first three months of 2020 have been dull, though there were a few films like Tanhaji, Street Dancer 3D and some other films like Thappad that did do business, the first quarter was low key. As for Baaghi 3 while the film did well, its box office run was marred by the Coronavirus pandemic, so yes that as well affected overall business.”

Talking about the future Mehra reserves his comments saying, “Further talking about what is to come Mehra continues, “Right now I cannot say what the future holds, I cannot play God. All we can do is wait and watch and hope that the box office figures pick up.” On the other hand Girish Johar has a reserved yet optimistic outlook when he says, “Right now nothing is happening; only writers and director are at work developing stories for future films so eventually we will see an increase in collections in the coming months”.

Concluding his analysis on the coming months, Taran Adarsh holds a reserved optimism when he says, “When the theatres do open it will be slow at first, since audience will stay away from crowded places due to fear. That movie watching, theatre going culture will have to be cultivated again amongst the audience. So yes the first few months will be slow, but it will pick up.”

NOTE – All figures are approximate