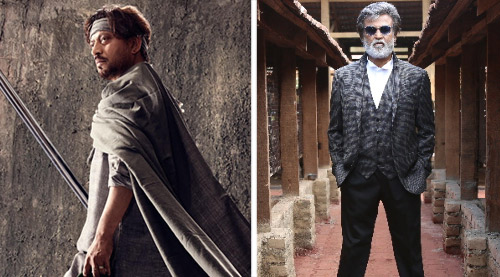 Irrfan's Madaari is giving it a fight at the Box Office. After scoring a weekend of 9.75 crore which was decent enough, considering the low start on Friday [2.25 crore], it had a decent Monday with 1.75 crore* more coming in. Now these are fair numbers and if the film manages to hang on to similar numbers for rest of the weekdays as well, it would at least have a reasonably respectable collections before the end of week. Irrfan's last release belonging to similar genre, Talvar, had managed first week collections of 15.55 crore and for now, it seems that Madaari would eventually manage to score similar numbers as well.

Kabali [Hindi] had fair numbers too on Monday as the collections came close to the 2.75 crore* mark. The collections are now around 17.75 crore* (only the Hindi version) and this means that the Robot [Hindi] lifetime collections [20 crore] would be surpassed today/tomorrow. It would also mean that barring Baahubali [Hindi], Rajinikanth holds the spot for second and third highest grosser for a dubbed release. That said, a lot more was expected from Kabali considering the hype and hoopla surrounding it, as well as the fact that the legend of Rajinikanth has been kept alive all-India via social media.

Overall though, Box Office has stayed low (except for South India, where Kabali has done quite well so far) in major parts of the country. Just around 5 crore from the two new releases on a single day (when the capacity is 20 crore+ across 2000 screens where these films are running) doesn't say much about the occupancy that theaters are enjoying.