Last Updated 31.01.2023 | 8:34 AM IST
feedback language
follow us on
Bollywood Hungama » Movies » Movie Reviews » The Sky Is Pink Movie Review: The Priyanka Chopra - Farhan Akhtar starrer THE SKY IS PINK has a great plot but falters on the account of a flawed execution and a lengthy runtime.

The Sky Is Pink Movie Review

The Sky Is Pink Movie Review: The Priyanka Chopra Farhan Akhtar starrer THE SKY IS PINK has a great plot but falters on the account of a flawed execution and a lengthy runtime.

The death of a young child can be one of the most painful experiences for any parent. Director Shonali Bose, who suffered a similar loss in her life, is now back with THE SKY IS PINK, based on the life of a motivational speaker, Aisha Chaudhary, who passed away at the age of 19. The team of the film has promised that it stands out as it focuses on celebrating the life of the deceased person instead of living through the sorrow of him or her not being there anymore. So does THE SKY IS PINK emerge as a touching and uplifting film? Or does it fail to strike a chord with the viewers? Let’s analyse. 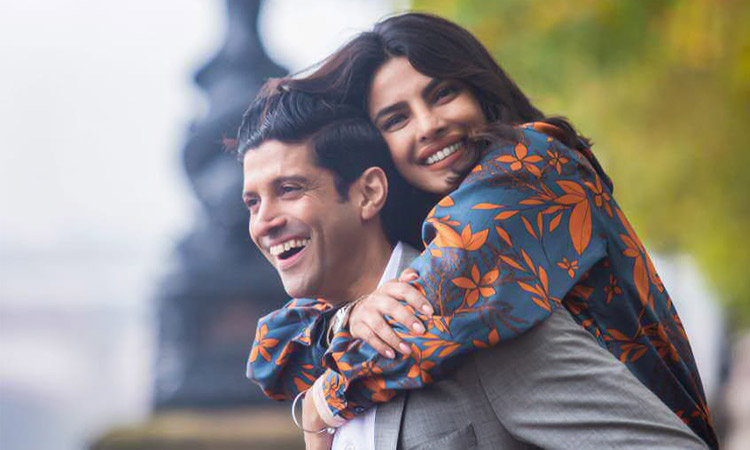 THE SKY IS PINK is the story of a family facing a crisis over a period of nearly two decades. Niren Chaudhary (Farhan Akhtar) from Chandni Chowk marries Aditi Chaudhary (Priyanka Chopra), a South Delhi girl and also his childhood love, in 1986. They have a son, Ishaan (Rohit Saraf) after a few years. Aditi also gives birth to a daughter, Tanya, but she passes away in 6 months. That’s because both Aditi and Niren have a rare faulty gene. They again try for a baby and on March 27, 1996, Aisha (Zaira Wasim) is born. Sadly, just like Tanya, Aisha too gets affected due to rare faulty genes of her parents and develops a condition called Severe Combined Immunodeficiency (SCID), an immune deficiency order. They move to London for her treatment and even manage to raise double the funds needed for her treatment. At the age of 6 months, Aisha gets a bone narrow transplant but as a side effect of this treatment, she develops a serious illness of the lungs called pulmonary fibrosis. This condition comes to the fore when Aisha is 13, at a time when the Chaudharys were hoping all her problems are history and she’ll lead a normal life. Moreover, the doctors make it clear that she won’t survive for more than 5 years. What happens next forms the rest of the film.

Shonali Bose and Nilesh Maniyar's story is very promising and could have made for the most touching film of the year. Shonali Bose and Nilesh Maniyar's screenplay works only in parts. A few scenes are exceptional but in some sequences, the writing doesn’t have the desired impact. The film constantly goes into various flashback modes and it might be difficult to keep a track of the same. Juhi Chaturvedi and Nilesh Maniyar's dialogues are okay. A few one-liners work well and are witty. But some of the dialogues misfire, especially the narration of Aisha penned by Nilesh. The humour in the dialogues looks forced, especially the constant hammering of Aditi and Niren’s sex life.

Shonali Bose's direction is strictly okay. She had a great subject in hand but she fails to do full justice. The film gets too long at 149 minutes and should have been way shorter. At the same time, a few details are skipped and ideally should have been focused, at least briefly. Aisha was inspirational speaker but this bit is touched only for a few seconds. Ishaan in a scene also exclaims that Aditi’s video has worked wonders on the internet. The audiences would have loved to see what Aisha spoke as motivational speaker, considering that she had a great sense of humour. Similarly, Niren is revealed to have a band and that surprises viewers as this part too never gets mentioned even once until the pre-climax. Shonali tries to make the situation light so that the film doesn’t get too heavy. Hence, she adds humour and in one crucial tragic scene, a funny background score is played and this decision completely fails to impress. On the positive side, she handles a few scenes with élan. One of the most beautiful aspects in the film is the bond Aisha has with her brother Ishaan. It’ll be unanimously loved.

Priyanka Chopra: “The Sky Is Pink is About Celebrating People’s Lives Instead Of…” | Farhan Akhtar

THE SKY IS PINK commences in the year 2015. The sad faces of Aditi and Niren indicate that things are not right between them. The story then goes on a flashback mode and keeps viewers engaged as Aisha gets conceived and her treatment takes them to London. A few scenes stand out here like Niren having the suspicion that Ishaan is not his son, Aditi blasting Niren for helping a lady called Sonia and Niren giving a surprise visit to Aditi in London. However, there’s too much back and forth happening as the film jumps across timelines. The emotional touch is also missing in the first half. In the second half, a few scenes are very moving and make the impact. But on the flipside, the long length plays spoilsport, among other factors. The subject, treatment, content and even the title is such that it’ll appeal only to select urban audiences.

Priyanka Chopra delivers a great performance and carries most of the film on her strong, able shoulders. She has a very difficult part to essay but she effortlessly succeeds. Zaira Wasim puts up a confident act. The story is about her but her childhood portions dominate most of the first half. As a result, she makes an entry very late, though her voiceover plays from the first scene. She looks convincing as a happy-go-lucky person suffering from a terminal illness. Farhan Akhtar has a restrained performance and gives his best shot. Sadly, he gets a raw deal as the narrative focuses more on Priyanka and Zaira. Rohit Saraf looks dashing and shines in some important scenes in the second half. Gurpal Singh (RJ Arjun Gill) gives a heartfelt performance. Rajshri Deshpande (Anita Tandon), who made an impact with SACRED GAMES, has blink-and-miss appearances throughout the film. Ishan Jotshi (Karan; Aisha’s crush) is decent. Sudhavna Deshpande (Dr. Nirvick), Puja Sarup (Mohini), Sunil Chitkara (Niren’s father) and Nirupama Verma (Niren’s mother) are passable.

Pritam's music is average. 'Dil Hi Toh Hai' is the best of the lot and is very well shot. 'Nadaaniyaan' and 'Zindagi' are not very memorable. 'Pink Gulabi Sky' is played in the end credits. Mikey Mccleary's background score is a bit theatrical and works only in some scenes.

Kartik Vijay and Nick Cooke's cinematography is appropriate. The locales of Andaman and Nicobar Islands are well captured. Aradhana Seth's production design are realistic and yet appealing. Eka Lakhani's costumes are straight out of life and not over the top. Manas Mittal's editing could have been tighter.

On the whole, THE SKY IS PINK has a great plot but falters on the account of a flawed execution and a lengthy runtime. At the box office, it will only appeal to a thin section of the niche audience in select metros.

The Sky Is Pink Box Office Collections: The Priyanka Chopra and Farhan Akhtar starrer is out of the race after Week One, all eyes on Housefull 4 next

The Sky Is Pink Box Office Collections: The film is wrapping up fast; all eyes on Priyanka Chopra’s next and Farhan Akhtar’s Toofan

#FinalVerdict Few filmmakers stick their necks out to tell difficult stories. For their intentions…

Priyanka, Farhan, Zaira and Rohit are all bloody fantastic. A heartfelt story backed by stellar…

had a emotional break down while watching the movie as the sequence, dialogue and everything is…