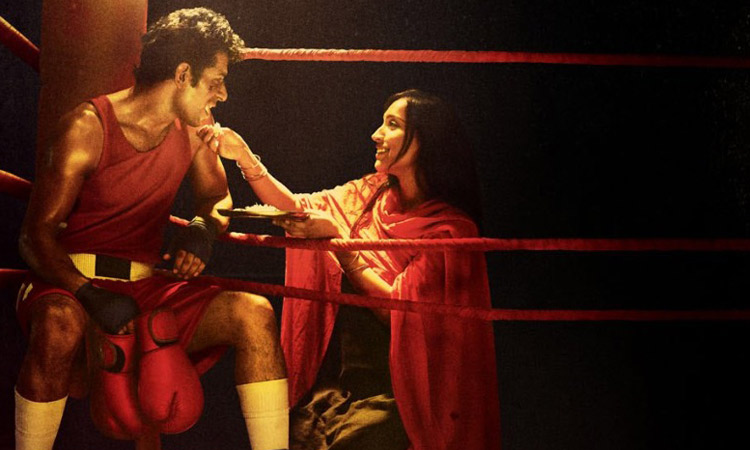 Over the last few years, we have had several films on sports [CHAK DE INDIA, BHAAG MILKHA BHAAG, MARY KOM, M.S. DHONI: THE UNTOLD STORY, DANGAL, SULTAN, SAALA KHADOOS] and most of them have been fairly successful at the box office and have been loved as well. These flicks also tackled several issues apart from showcasing the sports element. But not a single film has talked about how sports is often taken up by people to get a stable government job. Anurag Kashyap’s latest outing MUKKABAAZ talks about this aspect and several other issues faced by people in present-day India. So does it manage to make a great impact or tank? Let’s analyse.

MUKKABAAZ is the story of a lower caste youth who faces innumerable hurdles when he falls in love with a girl from a higher caste. Shravan (Vineet Kumar Singh) is a low caste boxer in Bareilly who falls for Sunaina Mishra (Zoya Hussain). Sunaina however is the sister of the local goon Bhagwan Das Mishra (Jimmy Sheirgill) who vehemently disapproves of this match not just because of the caste disparity but also because Shravan had assaulted him once. Bhagwan Das is a powerful authority in the boxing federation and he ensures that Shravan never gets selected for the district championship. Shravan then goes to Varanasi and trains under Sanjay Kumar (Ravi Kishan). He is desperate to win so that he can get a job in the railways and thereby also ask Sunaina's hand in marriage. This obviously is not going to be easy and moreover, Bhagwan Das has still not forgotten the humiliation of being assaulted by Shravan. What happens next forms the rest of the film.

The first thing that one notices is that MUKKABAAZ doesn’t seem like a typical Anurag Kashyap film at all. This is in fact his most commercial film till date. The film is replete with clapworthy dialogues and action scenes. At the same time, the film talks about a lot of issues plaguing the society. The caste hierarchy that forms the backbone of the society in rural areas is well presented. On the flipside, the film is too long at almost 150 minutes. The execution is scattered at places and scenes don’t play out in a flow. This coupled with the fact that songs start playing every few minutes at a lot of places doesn’t make the desired impact.

Anudeep Singh’s story is beaten to death especially the hero-villain track. However Anurag Kashyap, Vineet Kumar Singh, Mukti Singh Srinet, K D Satyam, Ranjan Chandel and Prasoon Mishra’s screenplay ensures that one doesn’t get a déjà vu of similar action and sport films in the past. Their dialogues are witty and acidic, making the right impact.

Anurag Kashyap’s direction is not his best as he fails a bit at several places in keeping the flow organic. A few scenes start and end incoherently. Also it’s brave of him to speak about beef related lynchings. But he keeps it extremely subtle and doesn’t even use the word 'cow'. Hence, those who aren’t acquainted with these shocking incidents won’t understand properly what’s going on. But on the positive side, some sequence are handled deftly like the scene where Sanjay Kumar and Bhagwan Das meet for the first time, Shravan threatening his railway boss, the very last scene etc.

Vineet Kumar Singh has delivered some great performances in films like GANGS OF WASSEYPUR, UGLY etc. But here he gets to play the main lead and rocks the show. He looks dashing and has worked hard on his body and also he gets the emotional quotient right. One of his most memorable scenes is when he’s blasting his father. Notice how he starts with being sarcastic and then suddenly tears come into his eyes. Zoya Hussain doesn’t speak at all and communicates merely through sign language. She masters it very well and even otherwise, she does very well. Jimmy Sheirgill is quite great in the villainous role. His eyes do a lot of talking and that’s quite a feat. Ravi Kishan (Sanjay Kumar) has a late entry but plays the crucial part with panache. Shree Dhar Dubey (Gopal Tiwari) makes his presence felt. Rajesh Tailang (Shravan's father Vijay) is fair. Other actors who leave a mark are the ones who play Sunaina's parents, Shravan’s sister, the cop and the junior coach. Nawazuddin Siddiqui is alright in a song.

There are far too many songs and most are forgettable. Also they are placed in such a way that one won’t be able to recall them. ‘Paintra’ sounds great but it’s relegated to the background and the dialogue overlaps during this track. ‘Mushkil Hai Apna Meil Priye’ is the best of the lot and serves as a theme song. 'Haathapai' is interesting while 'Chhipkali' and 'Saade Teen Baje' leave some impact. Prashant Pillai's background score is much better and dramatic and elevates the impact.

Shazia Zahid Iqbal’s production design is authentic. Rajeev Ravi, Shanker Raman, Jai L Patel and Jayesh Nair’s cinematography is gritty and also neat, as per the demands of the sequence. Aarti Bajaj and Ankit Bidyadhar’s editing could have been slicker and smooth. Vikram Dahiya and Sunil Rodriguez’s action is a highlight of the film.

On the whole, MUKKABAAZ is Anurag Kashyap's massiest film till date. It scores thanks to the performances, dialogues, action and some well executed sequences. But the long length, incoherent direction combined with a low buzz plays spoilsport and would surely affect the prospects of the film at the ticket window.