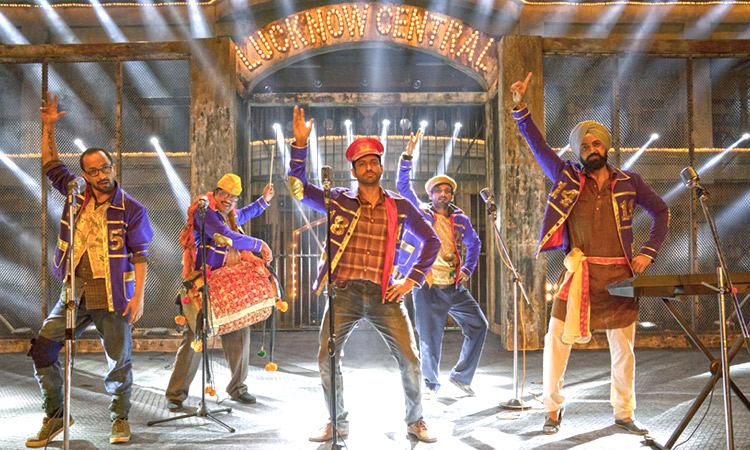 When it is a Farhan Akhtar film, you expect him to not just act but also come behind the mike. Not that he does that each time around but you do associate music with him in every film. Moreover, since the core plot of Lucknow Central is about under-trials who plan to make a big escape from jail while being a part of a musical band, you further expect Farhan to croon at least a song or two. However, none of that happens as newcomer composer Arjunna Harjaie picks up the mantle along with lyricist Kumaar to create most of the songs in the film with different singers.

It was back in 2001 when Monsoon Wedding had featured 'Kaavaan Kaavaan'. The Sukhwinder Singh song is rearranged by Arjunna Harjaie who ropes in lyricist Kumaar to write some new words for Divya Kumar to croon. There is good punch in this song which makes it stand out in the crowd. Moreover, even though the song is being heard all over again after more than 15 years, it sounds fresh as ever. Later the song is heard in a 'remix' avtar as well and the man in charge is Tanishk Bagchi who is fast becoming a favourite with the music company when it comes to this particular job. Renesa too joins Sukhwinder Singh.

Composer Rochak Kohli has been associated with Ayushmann Khurranna for a while now and has a distinct sense of music which brings together sufi and Western elements. This is what happens in 'Meer-E-Kaarwan' too which is written by Adheesh Verma. A well composed number that is quite good on ears, it also manages to make a good impact due to the manner in which Amit Mishra croons this one. He gets good support from Neeti Mohan towards the later stages of the song though one wouldn't have actually have minded just the solo rendition by Amit here since he sets the stage so very well, especially the hook.

Arjunna Harjaie and Kumaar are back, this time with 'Teen Kabootar'. A situational track that tries to get into the party mode inside the jail, what with the prisoners delivering a performance for the jailor [Ronit Roy], this one has Mohit Chauhan and Divya Kumar coming behind the mike. It aims at being cute and nice, though the final impact is nowhere close to that. Raftaar too chips in with his rap but overall the song stays on to be barely average.

Arijit Singh croons 'Rangdaari' next and this one too stays on to be situational at best. That said this one with its semi-classical tune and setting is much better than the song which was heard just before. With a serene feel to it, courtesy Arjunna Harjaie and Kumaar, 'Rangdaari' may not be the kind of song that you would love to watch but set it up during a long drive back home and you won't mind playing it on loop.

Last to arrive is 'Baaki Rab Pe Chhod De' which has Tanishk Bagchi picking up the mantle as a composer. With a UP-Bihar setting to it, this one has Brijesh Shandllya taking the lead behind the mike and he brings in good energy into play. He is supported by Arman Hasan, Vayu and Tanishk Bagchi himself for this Kumaar written number and what you get to hear is a hard-core situational number.

The music of Lucknow Central is largely situational and the good part is that most of these songs carry good energy and a thump to them. Though these may not stay on for long with the listener, when it comes to making an impact in the film's narrative these should do their job.