Dil Juunglee Movie Review: Dil Juunglee fails to connect with its target audience, thanks to its predictable storyline and way too many clichés.

Taapsee Pannu has had a good run at the box office lately. She got critical acclaim with Amitabh Bachchan starrer PINK in 2016 and since then her career has seen an upward trajectory. JUDWAA 2 with Varun Dhawan and Jacqueline Fernandez saw commercial success while NAAM SHABHANA got her critical acclaim. She also did a few South films which earned her accolades from masses. Now, she is back with a romantic comedy, DIL JUUNGLEE, which is presented as your typical rom-com fare. Taapsee Pannu is joined by Saqib Saleem in this flick. But does the film manage to impress at all? Find out here. 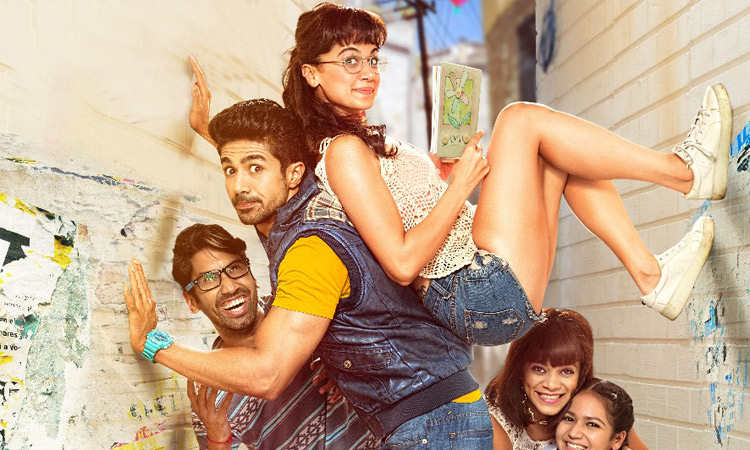 The story revolves around its two lead characters Koroli Nair (Taapsee Pannu) and Sumit Uppal (Saqib Saleem) and the way they meet, fall in love and live happily ever after. Bored already? Pannu essays the role of a rich London-based girl who comes to New Delhi to become a teacher. English literature is her calling and her character is a prototype of a typical ‘poor little rich girl’. Saqib’s Sumit is ‘Delhi ka desi launda’ who dreams of making it big in Bollywood. He starts taking English classes, no prize for guessing who his teacher is. After learning that Koroli is from a super rich family, he conveniently falls in love with her, elopes to Mumbai to get married but leaves her at the altar, or in this case mandap. Cut to seven years later, Koroli has become a no nonsense business woman in London, is all sleek and polished while Sumit is a small time actor essaying mythological roles in small films. They meet again and sparks fly. Koroli is engaged to a rich businessman while Sumit is committed to his co-actor. The movie plods further before giving us an unoriginal, uh-so-typical happily ever after!

DIL JUUNGLEE is directed by the first timer Aleya Sen, who is the co-founder of a production house– Chrome Pictures. It is far too evident from the overall treatment given to the project to understand that a novice has helmed the movie. Writing by Aleya, Tanoya Sen Sharma and Shiv Singh is lacklustre and boring. Despite being a woman, Sen paints her female lead in a poor light often making her look needy, desperate and a pushover. Koroli’s aim is to ‘settle down’ and constantly hankers for male validation from her boyfriend, fiancé or father. She ultimately falls all over again for a man who can only be described as entitled and selfish. DIL JUUNGLEE has a fairly clichéd plot with clichéd characterisation.

Performance wise, Saqib makes an effort to keep masses engaged with his impeccable comic timing and other histrionics in the first half of the film. But it looks like Taapsee has sleepwalked through the movie after a point. She gives up on DIL JUUNGLEE midway, just like the audience. Web sensations Nidhi Singh (Sumit’s fiancée) and Sirshti Srivastava (Koroli’s friend) are good and are true to their characters. Abhilash Thapliyal who plays Sumit’s friend is fine too.

Cinematography by Amol Rathod is decent; especially the camerawork in London. Background score by Abhishek Arora does not work and only one song from film: ‘Nachle Na’ by Guru Randhawa stands out. Editor Dev Jadhav manages to keep the movie short with its run time of almost 2 hours, yet the film feels like a drag. Going by the look of the film, costume designer Ayesha Khanna makes the lead actors look chic and young.

On the whole, DIL JUUNGLEE fails to connect with its target audience, thanks to its predictable storyline and way too many clichés. With no buzz around the film whatsoever, it is bound to struggle at the box office.

When Taapsee Pannu got injured in a car accident

Taapsee Pannu to deliver a speech at Harvard and here’s what it is all about!