Last Updated 12.08.2022 | 8:39 PM IST
feedback language
follow us on
Bollywood Hungama » Movies » Movie Reviews » Blackmail Movie Review: Blackmail is quite an unconventional entertainer and a good black comedy. It may not have a pan India appeal but the target multiplex audience are sure to enjoy this flick.

Blackmail Movie Review: Blackmail is quite an unconventional entertainer and a good black comedy. It may not have a pan India appeal but the target multiplex audience are sure to enjoy this flick.

Extra marital affair is arguably as old as the institution of marriage. A lot of films have already been made on this aspect. But take a look at various newspaper articles on extra-marital affairs and you’ll realize that some of them don’t go the conventional way and twisted and weird developments do take place. BLACKMAIL, directed by DELHI BELLY director Abhinay Deo, attempts to tell one such tale and as per the makers, it is inspired from a true story. So does BLACKMAIL manage to entertain with its novel storyline? Or does it turn out to be a disappointing fare? Let’s analyse. 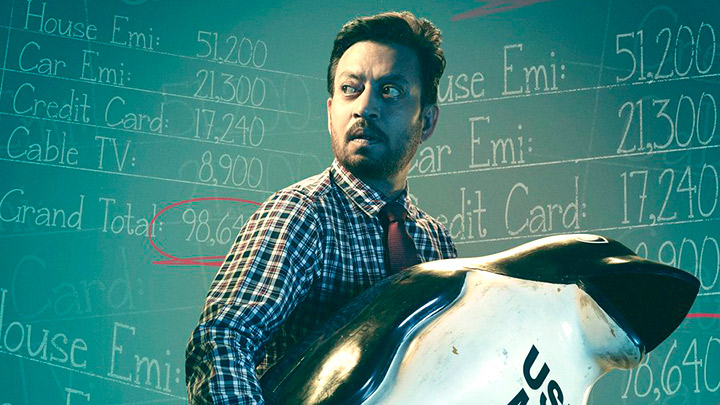 BLACKMAIL is the story of a bored and in-debt husband who devises a bizarre idea when he finds out that his wife is having an extra marital affair. Dev Kaushal (Irrfan Khan) works for Boss DK (Omi Vaidya) at My Handy, a toilet paper company. He is married to Reena (Kirti Kulhari) and their marriage has lost the spark. He prefers being in the office till late and playing games on the computer rather than going home early and spending time with his wife. Dev’s colleague Anand Tripathi (Pradhuman Singh Mall) advises him to go home early one day, buy flowers and surprise his wife. Dev likes this idea and goes home early only to find Reena sleeping with her ex-boyfriend Ranjit Arora (Arunoday Singh). On the other hand, Dev isn’t going to get a pay raise from DK and he has mounting debts. Hence, he buys a prepaid SIM card and blackmails Ranjit anonymously. Dev asks him to pay Rs. 1 lakh or else he’ll tell the truth to Dev! Ranjit is married to Dolly Verma (Divya Dutta) who suspects that Dev is cheating on her. Ranjit is broke and he asks for the blackmail amount under the pretext of starting a new business. Dolly hands him the said amount and he in turns hands it to Dev. Dolly’s father (Nav Ratan Singh Rathore) then asks Ranjit to return the Rs. 1 lakh that he took from Dolly and threatens him with dire consequences. With no other option in hand, Ranjit creates an anonymous email account and blackmails Reena into giving Rs. 1.20 lakh! He uses the same kind of words used by Dev in the blackmail message so that Reena would assume that it’s the same blackmailer. Reena has only Rs. 30,000 as savings and desperate to arrange the balance amount, she asks none other than Dev for Rs. 90,000! Dev agrees to give her the money but also realizes that he’ll be in debt again! So he asks for more money from Ranjit! As a result, Ranjit takes the Rs. 1.20 lakh from Reena, takes Rs. 20000 for himself and gives away the remaining amount to Dev! While this merry go around is going on, Dev confesses about blackmailing his wife’s lover to Anand. Anand in turn blurts out about it to Prabha (Anuja Anil Sathe), who has joined My Handy recently and whom Anand crushes on. Now Prabha starts blackmailing Dev for money and threatens that she’ll tell the truth to Reena if he doesn’t pay her up. What happens next forms the rest of the film.

BLACKMAIL doesn’t have a great beginning. The first 15-20 minutes are a bit dry and the film picks up when Dev learns about Reena’s extra marital affair. The madness enhances after a lot of players jump on the blackmail bandwagon! There are far too many characters and each one of them has his/her own quirks. Also the execution is stylish yet simple. Hence, despite so many characters and so much of blackmailing taking place, one doesn’t get lost or confused. The humour isn’t rib-tickling and it’s quite dark but it makes for a great watch. On the flipside, the climax is a bit of a downer. The film doesn’t sum up well at this juncture and a few questions are left unanswered. Dev’s act in the last scene is unpredictable but it’s not entirely convincing. Also, Dev-Reena’s bond is not properly established. No backstory is provided or no explanation is given as to why Dev is unhappy with his married life.

Parveez Shaikh’s story is quite novel and very entertaining but loses steam in the last 10 minutes. Pradhuman Singh Mall's dialogues are simple, straight out of life and witty. Parveez Shaikh’s screenplay is effective and gives the film the required edge and quirk. Abhinay Deo’s direction is very good and he handles the plot with panache. The director disappointed with GAME [2011] and FORCE 2 [2016] but with BLACKMAIL, he gets back in the zone of his landmark film DELHI BELLY [2011]. In fact, there are lot of similarities between the Imran Khan-starrer and BLACKMAIL right from the opening credits to the unreasonable boss to the protagonist not being happy in the relationship to multi-track narrative and finally, the toilet humour! But no worries since the toilet jokes here are not in-your-face like in DELHI BELLY. Moreover, there are some novel additions this time as well like Dev stealing photographs of women from office every evening to pleasure himself. This aspect is hilarious and would surely bring the house down. Also, the use of texts and supers gives the film a nice touch.

Irrfan Khan delivers a great performance and surprisingly, he doesn’t get to mouth a lot of dialogues. But then, Irrfan is known to communicate a lot with his silences and that’s what he does with BLACKMAIL. Also, his eyes speak a lot and one of the most memorable sequences of the film is where he sees his wife sleeping with another man. Just his eye is shown and one can instantly feel the sadness. Arunoday Singh is like the second lead actor of the film since he has a very crucial part to play. He delivers a fabulous performance and after MIRCH [2010] and YEH SAALI ZINDAGI [2011], this shall rank as one of his most memorable acts. Kirti Kulhari gives a genuine and earnest performance but surprisingly, she has limited screen time. Divya Dutta has a rocking entry sequence and she takes the film to another level with her performance. Pradhuman Singh Mall brings in the required fun and he does much better in the second half. Anuja Anil Sathe has a small role but she leaves a tremendous mark. Omi Vaidya is as usual quite funny and it’s great to see him after long. Gajraj Rao (Chawla) gets to play an interesting character and is quite fair. Abhijeet Chavan (Inspector Rawle) and Nav Ratan Singh Rathore add to the madness. Vibha Chhibber (Blind Woman) is hilarious and her sequence would be greeted with claps and whistles. Neelima Azeem doesn’t have much to do. Urmila Matondkar looks glamorous in the item song.

The songs are quite trippy and quirky which reflect the mood of the film. ‘Badla’ is the soul of the film while ‘Sataasat’ is in a similar zone. ‘Nindaraan Diyaan’ gets better in the last bit. ‘Bewafa Beauty’ is okay but comes at a crucial point in the flick. ‘Patola’ is played in the end credits. Mikey McCleary and Parth Parekh's background score has a similar feel as the music and that adds to the fun. It also prevents the film from becoming a serious fare.

Mustufa Stationwala's production design is quite realistic and impressive. The sets are eye catching – right from Dev’s office to the restobar to Dev’s residence to Ranjit-Dolly residence. Jay Oza’s cinematography is neat and captures the locales of Mumbai and Navi Mumbai very nicely. Huzefa Lokhandwala's editing is slick and ensures the film moves smoothly. Harpal Singh’s action is real but doesn’t get gory at any point. Veera Kapur Ee’s costumes add to the realism touch.

On the whole, BLACKMAIL is quite an unconventional entertainer and a good black comedy. It may not have a pan India appeal but the target multiplex audience are sure to enjoy this flick. The costs of this film are reasonable and as a result, it’ll turn out to be a profitable venture for its producers.

Irrfan Khan is a star throughout the movie. Each character in the movie is exceptional in the dark…