Readers would be aware that Salman Khan is producing the forthcoming Kichcha Sudeepa film Vikrant Rona. During the recent promotions of the film in Mumbai, the superstar made a surprise entry while the cast including Jacqueline Fernandez were performing on stage for the event. Needless to say the superstar was welcomed with a major shout out from the audience. 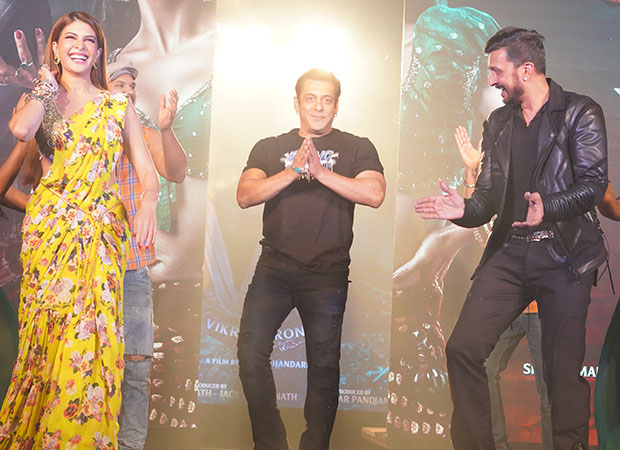 Jacqueline Fernandez and Kichcha Sudeepa were recently seen together promoting their film Vikrant Rona, which will be distributed by Salman Khan Films for the Hindi version. The superstar made a surprise entry during the pre-release event that was held in Juhu, Mumbai earlier today. While Jacqueline and Sudeepa were performing on the hook song from their film ‘Ra Ra Rakkamma’, the superstar made a ‘dhamakedaar’ entry and he was welcomed with several hoots and whistles. Here, have a look at the video:

Interestingly, his surprise entry and the pre-release Vikrant Rona event also coincided with yet another special event. Today is also the eighth anniversary of the Salman Khan, Jacqueline Fernandez starrer Kick and to see the two actors shake a leg together on stage was no less than serendipity. Directed by Sajid Nadiadwala and featuring Nawazuddin Siddiqui as the villain, the film Kick released on July 25, 2014.

On the other hand, in an earlier interview with ETimes, Kichcha Sudeepa had spoke about his Dabangg 3 co-star Salman's association with his film saying, "He is a big star, he has a big name and he has seen enough money. It's just support that he is rendering here (Kannada). I think it's a huge thing for SK Films to come on board."

Speaking of Vikrant Rona, the film will release in multiple languages including Hindi, Tamil, Telugu, Malayalam, and Kannada. Also starring Nirup Bhandari, Neetha Ashok, Ravishankar Gowda, among others, the film is directed by Anup Bhandari and it is slated to release on July 28.