Last week, we got to witness the powerful performance Ajith as a lawyer in the trailer of Nerkonda Paarvai. Even though it was just a sneak peek, fans of Thala Ajith are already going gaga over the same. Well, if you think the actor has only fans amongst audiences let us tell you that the South megastar also has a fan in his producer Boney Kapoor. Impressed with his humility and sincerity, Boney Kapoor recently revealed in reports that Ajith can inspire everyone with their qualities including his children Arjun Kapoor, Janhvi Kapoor, and Khushi Kapoor. 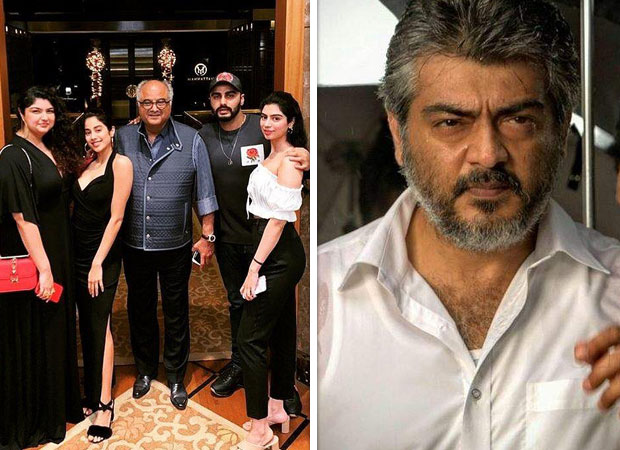 It is a known fact that Janhvi Kapoor has already made her debut in Bollywood and Arjun Kapoor is an established star, whereas, Khushi Kapoor is prepping for her big debut. Amidst that, Boney Kapoor who is working with Ajith as the producer of the actor’s film Nerkonda Paarvai is all praise for the star. He mentioned in current reports that Ajith is a gem of person who has extreme graciousness and gives respect to everyone. He explained that he gives everyone equal amount of respect, from a spot boy to a light man to a junior or senior.

In the same statement, Boney Kapoor also stated that he would like to see his family members take a leaf out of him and imbibe some of his characteristics. The producer maintained that he is impressed with his humility despite his star status. Furthermore, he asserts that this is because Ajith has been a genuine person since the start and that none of this is an act because a person cannot fake it for years together. Boney Kapoor maintained that the South superstar has been the same since the start and continues to be the same!

Thala Ajith starrer Nerkonda Paarvai is the remake of the Bollywood superhit Pink and stars Shraddha Srinath, Andrea Tariang amongst others in lead roles.