Meghna Gulzar's directorial Chhapaak, which went on floors, last month, has finally wrapped up its Delhi schedule. In order to mark the wrap, the director recently shared an adorable picture with Deepika Padukone and the entire team. 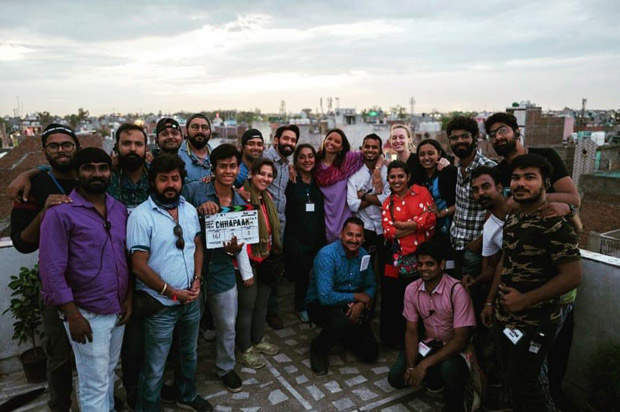 The film also stars Vikrant Massey as the male lead and Deepika Padukone will be paired with him for the first time. The actor too was seen shooting for the film in the capital along with the entire cast and crew. Now that they have wrapped up a major schedule, the team is excitedly looking forward for the next. Sharing her thoughts regarding the recent wrap up, Meghna Gulzar took to her social media handle to write about it saying, "Happily halfway done! Delhi schedule wrap for team #chhapaak  @deepikapadukone@vikrantmassey87 @foxstarhindi "

Readers would be aware that the story of Chhapaak has gained much popularity since it is based on true incidents. The film is inspired by the courageous story of acid attack survivor Laxmi Aggarwal who brought about a major change in laws for acid attack victims and continues to work towards their support and women empowerment. So, ever since the announcement of Deepika Padukone slipping into the character of an acid attack survivor broke, the news has already generated headlines all over.

A source close to the actress said, “Deepika Padukone is being lauded because instead of choosing a glamorous role, the leading lady of Bollywood is playing a character which challenges the notion of beauty, amongst the masses.” Chhapaak, highlights the life of an acid attack survivor and puts forth the confidence of the victim to be taken as a lesson and marks her as an inspiration for those who have faced the similar situation. The film is all set to release on January 10, 2020.