Last Updated 06.12.2022 | 10:31 PM IST
feedback language
follow us on
Bollywood Hungama » Movies » Movie Reviews » Chhapaak Movie Review: The Deepika Padukone starrer CHHAPAAK is a brave attempt at highlighting an issue and the crime that exists in our society.

Chhapaak Movie Review: The Deepika Padukone starrer CHHAPAAK is a brave attempt at highlighting an issue and the crime that exists in our society.

The number of acid attacks that have occurred over the years is alarming. What’s even more shocking is the lackadaisical attitude of the authorities in preventing such attacks and prevention of sale of dangerous substances. After all, such an act can destroy lives as it damages the face permanently. Bollywood has been attempting some brave films on various topics but this was one issue that was largely ignored. Director Meghna Gulzar, who has found respect and admiration after the back-to-back success of TALVAR [2015] and RAAZI [2018] now comes up with CHHAPAAK, that attempts to address these aspects. The film has been in the news since the time the makers revealed the look of its lead actress Deepika Padukone, while it was being filmed. So does CHHAPAAK manage to entertain and shock viewers? Or does it fail in its endeavour? Let’s analyse. 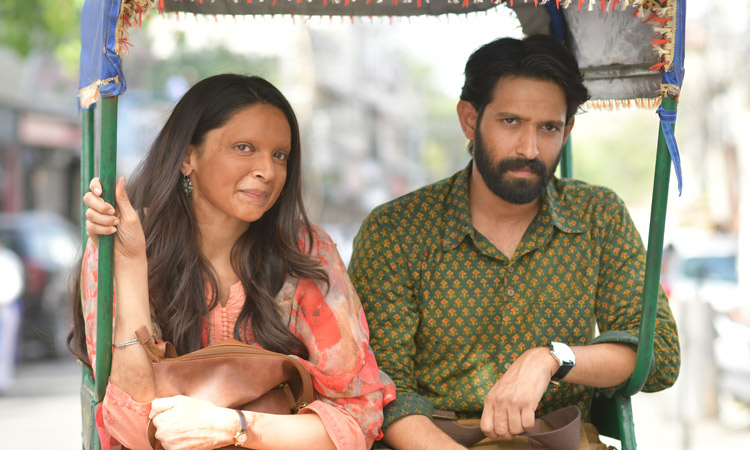 CHHAPAAK is the story of an acid attack survivor. The year is 2005. Malti (Deepika Padukone) is a 19 year old girl who gets attacked by acid on a street in Delhi. A good Samaritan takes her to the hospital. Her face is irreparably burnt, with no chance of it getting back to its original form. Malti however is determined to get the perpetrator behind the bars. Despite difficulty in speaking at the time of the tragedy, she manages to tell the cops that the attacker is Basheer Shaikh aka Babbu (Vishal Dahiya) and her sister Parveen. The cops arrest both and Babbu confesses that he indeed got the acid thrown on Malti. Shockingly, Babbu was a family friend of Malti's and even made the rounds of the hospital to visit her, post the attack. In the court, Malti’s lawyer Archana Bajaj (Madhurjeet Sarghi) gives a tough fight but Babbu manages to seek bail on some grounds or the other. Archana stresses on maximum punishment though the law is not clear on acid attacks specifically. This prompts Malti to also file a PIL, asking for ban on the easy availability of acids. What happens next forms the rest of the film.

CHAAPAAK’s story is mostly based on real-life incidents and is quite hard-hitting. It also turns out to be an eye-opener as many wouldn’t be aware of the seriousness of the situation and that acid is so easily available in India. Atika Chohan and Meghna Gulzar's screenplay however is inconsistent. There are scenes where the film really captivates you and moves you. But in places, the writing is not polished well while the emotional connect is missing and this affects the overall impact. Atika Chohan and Meghna Gulzar's dialogues are sharp.

Meghna Gulzar's direction is strictly okay. Both TALVAR and RAAZI worked so well as they didn’t just have a good story, but also great execution. But in case of CHHAPAAK, Meghna doesn’t seem to be in top form. The idea to start the film from the middle of the narrative didn’t quite work. Malti’s struggle is moving but only till an extent. A lot could have been done here but Meghna simply rushes through some key scenes. This is especially evident in the courtroom sequence. Also, an important track is that of Malti’s brother (Delzad Hivale) but hardly any time is spent on this episode. Nothing is explained later as to what happened to the brother and also Malti’s father (Manohar Teli). If Meghna had indeed given her best here, then considering the potential of the story, CHHAPAAK could have gone beyond what's on screen.

CHHAPAAK begins on a very dry note and in a non-linear fashion. For the first 10-15 minutes, the audiences might not get engrossed. It’s only when the flashback portions commence that the film picks up. Some of the most impactful scenes of the first half are Malti seeing her face in the mirror, after the attack, for the first time, and Archana urging Malti to wake up and fight the battle. The courtroom scene keeps one hooked but one wishes it had more drama. In the second half, the romantic track doesn’t work much. Also, there comes a point when one doesn’t really know where the film is going. Meghna reserves another round of flashback in the climax and here, the film picks up again. Also, one understands the dynamic between the characters and what led to the acid attack in the first place.

Deepika Padukone carries the difficult part with rare subtlety. She underplays her part well and in scenes where acid is splashed on her face and she comes to terms with it, the actress does a good job. But in most scenes, she doesn’t emote much and is merely the observer. One wishes she had done something in these sequences, which could have added to her performance. Vikrant Massey looks great and gives a genuinely fine performance. Sadly, he is let down by the writing. Madhurjeet Sarghi has a crucial part and plays it with élan. She looks quite confident in the courtroom scenes. Vishal Dahiya delivers a splendid performance. Delzad Hivale is wasted. Payal Nair (Shiraz) and Vaibhavi Upadhyay (Minakshi) are okay. Manohar Teli is fine and is endearing in the scene where he’s secretly having alcohol. The actor playing Parveen is damn good in the courtroom scene.

On the whole, CHHAPAAK is a brave attempt at highlighting an issue and the crime that exists in our society. At the box office, it will have a difficult journey since it is not a commercial entertainer. Its business will be restricted to a tiny section of the multiplex frequenting audience.

Deepika Padukone hopes to have a therapist present on film sets in the coming years; reveals she had a panic attack during Chhapaak

Updated on May 12, 2022 10:52 AM IST
Bollywood Hungama News Network https://www.bollywoodhungama.com/

EXCLUSIVE: “I am very proud of her for what she did,” says Vikrant Massey on Deepika Padukone’s show of solidarity at JNU

This is a must see film. We saw it with our son in the 9th standard who wanted to come. It is a…

Sorry to say but movie is not upto the mark... Short films are good for topics like this... slow…

it is really great one, it is basically in base of true events , deepika is on her high and gave…