Yet another video from the sets of Chhapaak seems to have found its way to the internet. After a video of Deepika Padukone dressed as a school girl started doing the rounds a day ago, the next video that has gone viral is this romantic scene between Deepika and Vikrant Massey where the two of them are kissing! 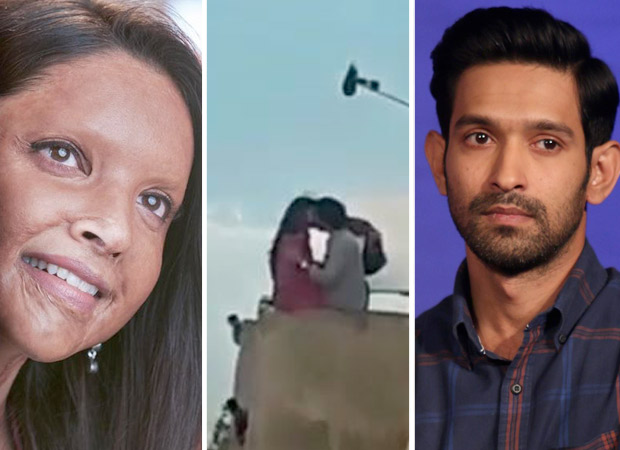 It is a well known fact that Deepika Padukone and Vikrant Massey are paired together for the first time in Chhapaak. While he plays the role of her role interest in the film, this is the first time where their romantic sequence has been leaked. The video features the characters in a casual avatar shooting this scene at the roof top of the building. And going by the throng of crowd around who were eager to catch a glimpse of the actress and the scene, we can say that the scene was shot in a real location.

As one may have seen in the video above that the shoot was surrounded by onlookers, who were mostly residents of the area. And in one of the videos, as Vikrant was about to kiss his co-star on screen, amidst all the cheering and howling, one can hear one of these onlookers shouting, 'Aee Bachhe Ko Mat Dikhao' [Don't show it to the kids].

This is not the first time where a video from the sets of the film was leaked. As mentioned before, the video of Deepika sporting the avatar of a school girl too had made its way to the internet earlier this weekend. The actress is currently shooting for the film in Delhi and considering the many videos that have started doing the rounds across social media platforms, the team has now decided to beef up security whilst shooting.

For the uninitiated, Chhapaak is based on the real life story of acid attack survivor Laxmi Aggarwal. The Meghna Gulzar directorial will mark the debut of Deepika Padukone as the producer. While the first look poster has been released, the film is expected to hit the theatres next year, that is on January 10, 2020.

Also Read: WATCH: Deepika Padukone transforms into a school girl for Chhapaak in this leaked video