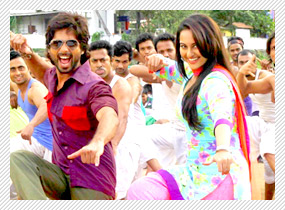 It all started with 'Dhadang Dhang' (Rowdy Rathore) for Sonakshi Sinha and ever since there has been no looking back for the actress, as far as dancing in a 'bindaas' style for Prabhu Dheva is concerned. If the recently released number from R... Rajkumar - 'Mat Maari' - is any indication, this Sinha scion is all set to burn the dance floor for many more films to come.

"With Prabhu Dheva, I have been able to establish a certain rapport that is seemingly working quite fine. He doesn't really have to explain one thing to me three or four times. Such is the kind of tuning that I enjoy with him that if he just gives me an instruction, I know what he wants," says Sonakshi.

With ‘Mat Maari’, Sonakshi makes it three in a row for R… Rajkumar

Courtesy the fact that she was also roped in alongside Prabhu Dheva for 'Go Go Govinda' in OMG - Oh My God! last year and has been a part of three dance numbers in R... Rajkumar - 'Gandi Baat', 'Saree Ke Fall Sa' and 'Mat Maari' - one can well believe her.

Adds Prabhu Dheva, "I believe Sonakshi is what one can term as a complete Bollywood heroine. She can emote well, dance well and perform well. What amazes me is that she is such a quick learner. In such a short span in the industry, she has managed to accomplish so much. Now for those who were wondering if she can come up with those hardcore 'latka jhatka' dance steps, R... Rajkumar is the answer."

Considering the fact that the man alongside her is none other than Shahid Kapoor, who is a trained dancer himself, it was a task indeed for Sonakshi.

"Well, sometimes music does the trick too," says Sonakshi who recently launched the film's music at an event hosted by Eros and Viki Rajani, "Prabhu Sir has the best sense of music and he thinks absolutely commercial and massy. He comes up with these 'latka jhatka' songs that are so full power that you cannot ignore. Such is the confidence level that he carries in his music. That is bound to rub on us actors as well and we have no other choice but to do well. As a matter of fact he even picks up every song and guarantees particular festivals in which it would be played."

Well, now that is something that we would love to know more about when it comes to the songs of Râ€¦ Rajkumar!