Akshay Kumar is not only one of the most bankable stars but is also a man who believes in being fit and healthy. The actor is very strict about his fitness regime and follows a particular routine to get through the day. He is often seen sharing his workout routines on social media to inspire others to get up and get training. 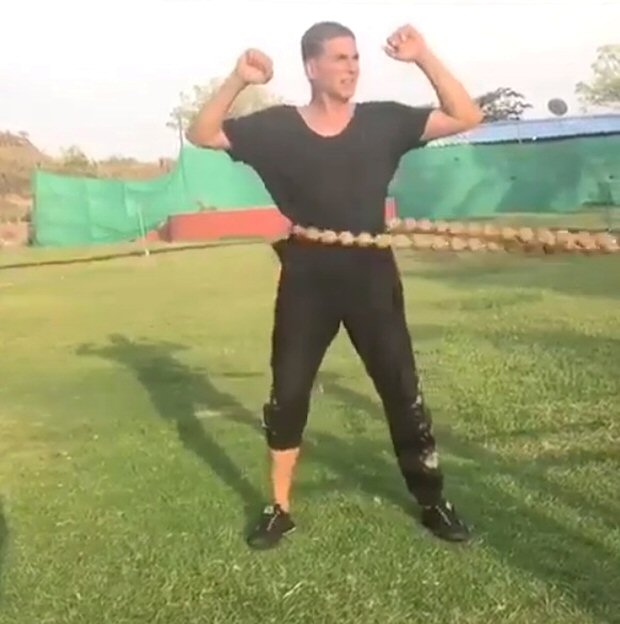 It was recently heard that Akshay Kumar was injured on the sets of Kesari. But, he continued shooting despite that. Sharing his workout video of core training for stomach and back muscles, Akshay seemed like he was doing just fine. He captioned the video, "Core training my way through the summer heat with these wooden beads...great for the back and stomach muscles. Also best time of the year to sweat it out Time for a #FitIndia."

On the work front, Akshay Kumar has an array of projects n the pipeline. Last month, he was seen in R Balki’s directorial Pad Man. He will be next seen in Reema Kagti’s Gold, which is set for August 15, 2018, release. The film is based on the real story of Indian Hockey Team’s first gold medal win after independent India. The film has been produced by Excel Entertainment. The actor is currently shooting for Kesari which also stars Parineeti Chopra in the lead. He is also on board for Housefull 4. The film stars Riteish Deshmukh, Abhishek Bachchan and Bobby Deol. It is reportedly set for Diwali 2019 release.

Core training my way through the summer heat with these wooden beads...great for the back and stomach muscles. Also best time of the year to sweat it out ???? Time for a #FitIndia ????????

Also Read: KESARI: Akshay Kumar shines as the courageous Havildar Singh and wishes everyone on the occasion of Baisakhi