Akshay Kumar is currently starring in Kesari which retells the story of Battle Of Saragarhi. The film has earned Rs 86. 32 crore at the box office. The actor has been praised for his power-packed performance as Havilder Ishar Singh. One may remember that while filming the movie, the set of Kesari was burnt to ashes. 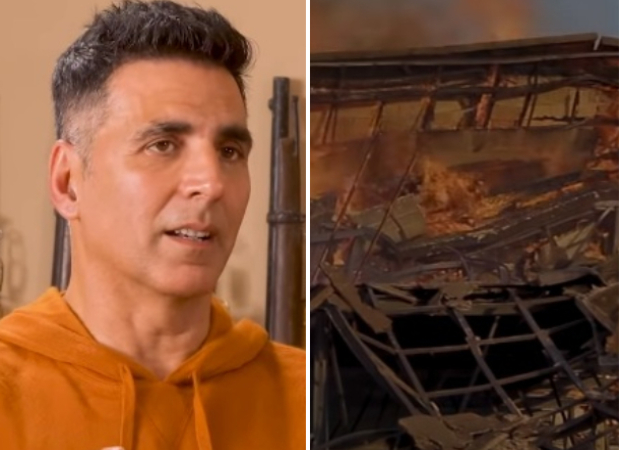 Karan Johar shared the video and captioned the video, ''A team that rose from the ashes, a team that defined courage.''Now, in the new making video, Akshay Kumar is seen narrating what went down while they were shooting. ''We had almost finished shooting most of the scenes in Wai and were gearing up to shoot one of the most important scenes of the battle sequence. The cameras rolled and there were about seven cameras on the set, but then...within seconds, we saw the set engulfed by fire, even before people could react,'' he said in the video.

''We didn't realize that there was something which was there that took off and the entire set literally melted away,'' he said, adding that he had no clue about the cause of the mishap.

Director Anurag Singh also shared his experience of how they had to recreate a new set. Anurag said, ''We knew that we were like 10-12 days away from finishing the film schedule and the set burned down. I was so upset and so was my team. We knew that now this is going to be difficult to finish.''

''We were there for four months. You are practically living there and you get attached to a place. It was heartbreaking. I think all of us cried when we saw the set burning down. Then I talked to Karan sir, the guy who has invested the entire money in the film, and he said, 'Anurag, don't worry, maybe this is for the best,'' Anurag added.

Based on the true story, Akshay Kumar and Parineeti Chopra starrer Kesari released on Holi, March 21, 2019.

ALSO READ: Akshay Kumar hopes after Kesari, this chapter of Battle Of Saragarhi is added to history books