Falguni Pathak and Neha Kakkar were trending on the internet over the remake of ‘Maine Payal Hai Chhankai’ While Falguni expressed her disappointment saying she would take legal action for the rights of the song was with her, Neha defended herself with a cryptic note on Instagram addressing her ‘haterz’ trolling her for ‘O sajna'. However, it seems Kakkar and Pathak seem to have put all of this back rather quickly as recently, Falguni Pathak met Neha Kakkar on the sets of the latter's singing reality show Indian Idol, and played Garba with her. 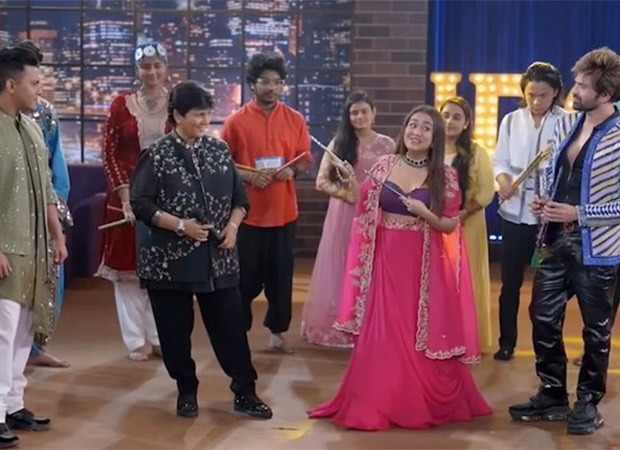 In the video, Neha can be seen talking about a special theatre round while mentioning that the same day marks the start of Navratri. Later, she introduces ‘legendary’ Falguni ma’am. As the video progresses, we can see the Dandiya Queen singing one of her special Garba ‘Mane Mavtar Made To’ while Neha along with Himesh Reshammiya, Aditya Narayan, and other fellow contestants can be seen enjoying garba and dandiya.

For the unversed, a week ago, Kakkar dropped her latest track, ‘O Sajna’, which is a remade version of Falguni Pathak’s song that released back in the ‘90s. Including netizens, Pathak also critiqued the song. In an interview with Pinkvilla, Pathak said, “I wish I could (take legal steps) but the rights are not with me”, when asked if she is planning on taking the legal route. Meanwhile, in another interaction with Delhi Times, Pathak was quoted saying, “I got to know about the remixed version three-four days back. First reaction was not good. I was like, mujhe bas ulti aani baaki thi, aisa ho gaya tha. (I was about to puke, it was like that)”.

On the other hand, in a cryptic post, Neha addressed her haters and wrote, “Very few people in the world get what I have received in life. That too in such a young age. This kind of fame, love, countless super hit songs, super duper hit tv shows, world tours, fans from little kids to 80-90 years old people and what not! You know why I Got all this because of my talent, hard work , passion and positivity.”