It was Bollywood extravaganza at the pre-wedding festivities of Mukesh Ambani's daughter Isha Ambani and Anand Piramal. The couple had their sangeet, dance and other rituals in Udaipur last weekend. The grand events saw attendance of B-town celebrities, Former First Lady of United States Of America, Hillary Clinton and Beyonce. But, it seems like Vidya Balan is on cloud nine after meeting Hillary Clinton. 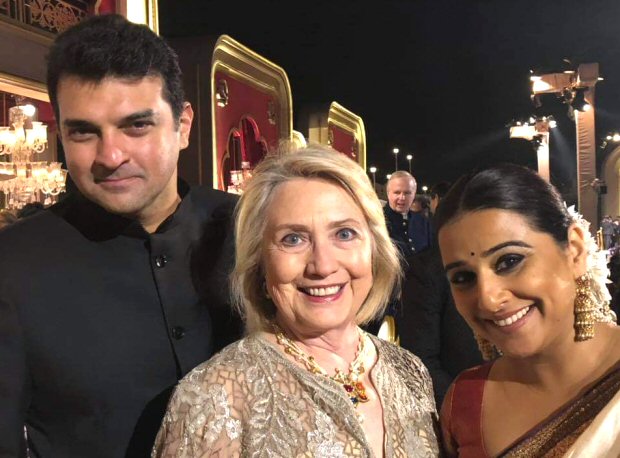 Taking to her Instagram, Vidya Balan shared a 'precious picture' with Clinton. She wrote, "Precious pic ????!! This is the first time in my life that i asked to be introduced to someone...Thank you @smritiiraniofficial for the same ????.I loove @hillaryclinton ♥. A woman who has weathered every storm with equanimity and who never gives up...I felt hopeful while she campaigned to be #President and felt a certain hopelessness when she didn’t make it...But in a few days i realized that only when the glass ceiling is shattered can we reach the sky and she broke it for us...and thus paved the way for someone else to reach for the boundless blue."

She further revealed that it was Smriti Irani, Textiles Minister, who introduced her to Hillary Clinton. She wrote, "You may find many reasons to dislike her but that’s because you are judging her because she dared to travel where most don’t...Thank you @hillaryclinton for all that you are and for being a HERO ☀!! And thank you my #siddharthroykapur for being a walking talking encyclopedia on American politics and for thereby introducing me to Her ????. I couldn’t have imagined waking up at 6am to watch the primaries until you happened to me."

On the work front, Vidya Balan will be next seen in NTR Biopic titled Kathanayakudu. The actress will essay the role of Telugu superstar and former CM of Andhra Pradesh NT Rama Rao’s wife Basavatarakam. The first part of the biopic will release on January 9 next year. Vidya Balan is also starring in Mission Mangal alongside Akshay Kumar, Sonakshi Sinha, Taapsee Pannu among others.