Filmmaker Abhishek Varman, who helmed 2 States in the year 2014, is set to helm one of the most anticipated films with a huge cast. The director is all set to helm the multi-starrer film Kalank in collaboration with Fox Star Studios, Dharma Productions and Nadiadwala Grandson Entertainment. The film went on floors earlier this week with Varun Dhawan, Sonakshi Sinha, and Aditya Roy Kapur. The film will mark the return of Sanjay Dutt and Madhuri Dixit after many years. Just a day ago, Bollywood Hungama reported that Kiara Advani is also a part of the film. She shot a song for the film and will be seen in a guest appearance in Kalank. 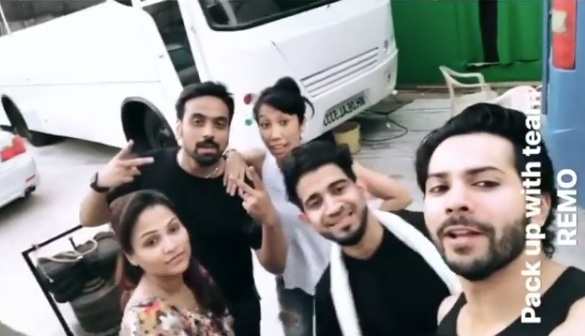 Now, we hear that the first song has been wrapped. Varun Dhawan, himself, announced that they packed up on Sunday morning at 6 am. Though Kiara Advani who is reportedly in the song and has a cameo in the film was missing in the video, the choreographers and crew members were present in the video. He said that they had just wrapped up the song but there is still more to go.

Varun has been sharing quite a lot of videos on his Instagram stories whilst in the gym. He has been sweating it out too much in the gym to prep for the role. From weight lifts to push ups to boxing, the actor is doing it all and hustling hard.

Also Read: EXCLUSIVE: Kiara Advani to have cameo in Kalank; shoots a song with Varun Dhawan