Star Plus's popular drama Ghum Hia Kisi Ke Pyaar Meiin fame Neil Bhatt and Aishwarya Sharma got married two days back. The couple got married after dating for more than a year. They both met each other on the sets of the show itself and instantly fell in love. 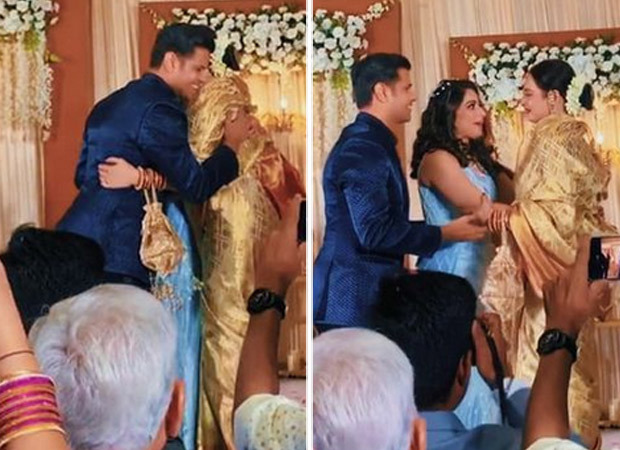 Recently, the duo got married in Ujjain, Madhya Pradesh and their wedding was a grand affair. Apart from that, the couple also hosted a reception party for industry friends and colleagues in Mumbai on November 30th. The party was attended by many people from the entertainment industry. Neil and Aishwarya's co-stars Ayesha Singh, Yogendra Vikram Singh, Sneha Bhavsar, Mridul Kumar, Sailesh Datar were amongst the others who were present for the celebrations.

While what stole the show and took their reception to another level was veteran ace actress Rekha's arrival. Rekha who has been associated with the show came to attend the duo's reception.  In the video going viral on social media, Rekha can be seen arriving on the stage and gifting something beautiful to Neil and Aishwarya. The evergreen actress looked marvellous as she donned her signature Kanjeevaram golden saree. As soon as she came near the stage, Neil and Aishwarya both rushed to welcome her. The actress then hugged and gave her blessings to the newly married couple.

For the unversed, the introduction promo of Ghum Hia Kisi Ke Pyaar Meiin featured Rekha in it. She only gave an introduction to the show and also recently announced the high point in the storyline. Neil and Aishwarya both opted for blue for their reception party. While Neil looked dapper as he donned a blue Jodhpuri suit, Aishwarya on the other hand looked gorgeous in a sea blue gown.