K-pop’s 4th generation ‘It’ boys TOMORROW X TOGETHER (Soobin, Yeonjun, Beomgyu, Taehyun and Huening Kai) released '0X1=LOVESONG (I Know I Love You)' feat. pH-1, Woodie Gochild, Seori, a remix of their newest title track from The Chaos Chapter: FREEZE which made its Billboard 200 debut in Top 5. 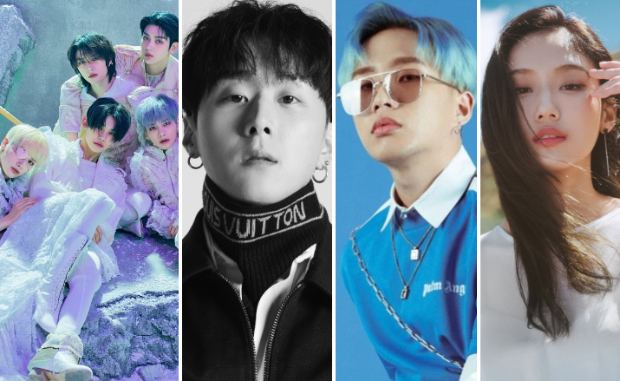 The original title track, '0X1=LOVESONG (I Know I Love You)' feat. Seori, is an energetic Hybrid pop-rock song that expresses a boy’s certainty in the love he feels for ‘you,’ who came to him in a world of chaos. The members’ vocals are simultaneously rough and delicate and are wonderfully complemented by the dreamy vocals of featuring artist Seori.

The new remix feat. pH-1, Woodie Gochild, Seori differs from the original track with its use of acoustic guitar, bass, electric guitar, and electric keyboard. Korean rappers pH-1 and Woodie Gochild also feature on this track with their own interpretations of “love.” pH-1 burns with passion for love as he croons, "Uh, are you my crystal ball? / Imagine the two of us a thousand times a day / Okay, I exaggerate, but the point is made (made) / Imma pull up to your block, probably around eight (Yeah) / Wear comfortable clothes and ride next to us, we go riding / If it's not you, I won't burn you next to me."

In the second verse, Woodie Gochild adds, "After your empty seat swallows me, I am nothing / I want to get angry, what are you going to do? / If I'm falling to you, baby, be my bungee / If I could go back to that time / I'll fill you up so you don't feel lonely."

Seori joins TXT in the chorus, "Say you love me, say you love me / To the end of the world / All or nothing, I want all of you / I know I love you."

Showcasing their acoustic sound, TXT blends their pop-rock hybrid track perfect with the rap verses of the Hip Hop artist and Seori. The remix version is quite catchy and shows an intriguing side of the group and how they can bring in a new flavour to the track.

The song is the collaborative effort between producers of HYBE’s labels Slow Rabbit and “hitman” bang, American singer-songwriter and BTS' RM, Rock Hip hop artist Mod Sun and No Love For The Middle Child as songwriters among others. Adding to the remix, Huening Kai, Yeonjun and Yeonjun have participated in the lyrics along with rappers pH-1 and Woodie Gochild.

TOMORROW X TOGETHER released their second studio album The Chaos Chapter: FREEZE on May 31. The album features eight tracks including the title track '0X1=LOVESONG (I Know I Love You)' feat. Seori and the band’s first English song 'Magic'. Following the album’s release, 'Magic' became the No. 1 Most Added on Mediabase Top 40 Add Board (June 1).

With The Chaos Chapter: FREEZE, the band made two appearances on Good Morning America (GMA) and made their late-night television debut on The Late Late Show with James Corden.