Last Updated 05.10.2022 | 6:53 PM IST
feedback language
follow us on
Bollywood Hungama » News » Bollywood Features News » TXT is on a mission to save the human race in sci-fi music video for English single ‘Magic’

K-pop’s 4th generation ‘It’ boys TOMORROW X TOGETHER, featuring Soobin, Yeonjunm Beomgyu, Taehyun, and Huening Kai,  have released the music video for their first English song, 'Magic'. The new music video depicts five boys on a mission to save the human race from a world overrun by machines. 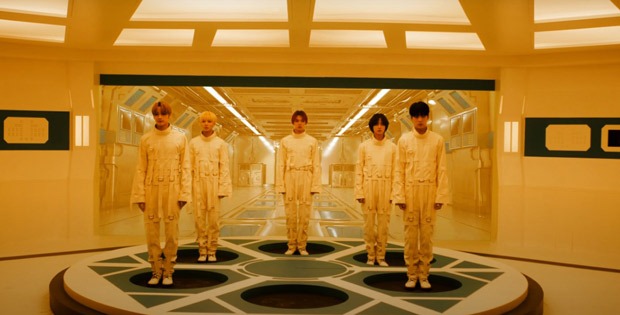 The members of TOMORROW X TOGETHER manage to rescue people by feeding pirated broadcasts and disrupting the machine network but are eventually apprehended and penalized with the maximum sentence in court. As the story progresses, we discover that the five boys had already infiltrated the main server with a code of “emotion” unidentifiable by the digital population. The science-fiction-esque music video ends on a festive and celebratory note with the destruction of the machines. Within this story, it is evident that human emotion is the true “magic” beyond all wonders imaginable. The music video seems have been shot at Jamsil Stadium in South Korea.

'Magic' is a trendy Disco pop track and TOMORROW X TOGETHER’s first English song, released as part of the band’s second studio album, The Chaos Chapter: FREEZE. It is a bright and refreshing summer song that celebrates “your” magical power to melt the ice around me. The song features a truly dynamic performance including the song’s signature choreography ‘Magic Moves’ which uses hands to depict magic raining down from the sky.

Following the release of The Chaos Chapter: FREEZE, 'Magic' became the #1 Most Added on Mediabase Top 40 Add Board (June 1). TOMORROW X TOGETHER also made their performance debut of the song for the first time on Good Morning America on June 10, and will be making a reappearance on June 12 to perform their new title track, '0X1=LOVESONG (I Know I Love You) feat. Seori.' The band is also set to perform 'Magic' on The Late Late Show with James Corden on June 14 (CT).