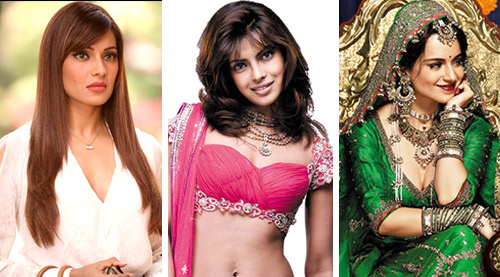 The cliches are all in place-double (and more) roles are a great way of enhancing both a film's dramatic and commercial appeal-like getting two Amitabh Bachchan's (or three in Mahaan) or Sridevi's for the price of one ticket. Usually dual roles are a study in contrast-good/bad, old/young, rich/poor, strong/weak or even fair and dark (Gora Aur Kala).

In 2015, the dual role has seemingly come back with a vengeance (Alone, Roy, Tanu Weds Manu 2, Fan, Prem Ratan Dhan Paayo), and of course, it's no longer the old kind of trick photography and dual shoots but digital VFX and other advanced methods that do the trick today. Patni Pratap, the silent 1917 film that had Hindi cinema's first-ever dual role, by Anglo-Indian Patience Cooper, must have looked then like the eighth wonder, technically speaking!

Since then, we must have had over 150 (a minimum guesstimate) such cases, later moving on to triple roles and more. Here's presenting the unusual and unique ones among them.

The all-time record is held by Robot (2010), the dubbed Hindi version of Endhiran, in which Rajnikanth was cloned in the laboratory. Initially, the story needed a single clone, but later, the narrative needed hundreds and finally, in the technically-stunning climax, thousands of Rajnikanths came in!

Priyanka Chopra played 12 girls-all young of what is known as 'marriageable age' but diverse zodiac signs- in the 2009 flop What's Your Raashee?. In the bi-lingual Dashavtar (2008), Kamal Haasan essayed 10 characters, including the hero (a bio-scientist), the chief villain, and everyone from a folk singer to (hold your breath) US president George Bush and a Japanese martial arts expert!

Next up was veteran Sanjeev Kumar in his 9 exemplary turns in the Sivaji Ganesan hit Navrathri's remake in 1974-Naya Din Nayi Raat. The modest success in Hindi had Sanjeev wonderfully etch out, among others, a leper, a dacoit, a god-man who is actually a smuggler and even a transvestite!

In terms of convention, funster Mehmood played father, son and grandson in Jeetendra's home production Humjoli (1970), and the three were modelled on Prithviraj, Raj Kapoor and Randhir Kapoor (then still to make his debut). The amazing part was that 18 months prior to Randhir's debut, the script prophetically gave the 'youngest' Mehmood a similar image that Randhir attained later, complete with Kishore Kumar as his voice in a swinging song!

But why we mention this role before the other 'triples' is that through special effects in that technologically-primitive time, special effects whiz Dahyabhai Patel incorporated Mehmood's face even on the newborn child of the grandson! So in effect, one could term this role 'quadruple'!

I.S. Johar's unforgettable triple (and comic) essay in Johny Mera Naam also scored over those of heavyweights Dilip Kumar (Bairaag/ 1976) and Amitabh Bachchan (Mahaan / 1983), both of which had routine melodramatic turns as fathers and two sons, with the only novelty being "three for the price of one"! Thus Bairaag was a mediocre success, and Mahaan a flop!. "Rajnikanth worked in triple role in John Jani Janardhan (1984) which was also a flop".

But what was marketed more as a dual role (two brothers, one of whom is a dwarf) was the 1990 dubbed Appu Raja. This was because of attention got by the dwarf Appu, who avenges the murder of his cop father, though that role too was played by Kamal Haasan! The way the dwarf was shown was more about human ingenuity and camera angles than 'trick' photography-and VFX was unknown then!

Finally, David Dhawan's all-time hit, Aankhen (1993) saw three artistes in dual roles each-Govinda, Raj Babbar and Kader Khan-thus contributing to the fun quotient of the caper comedy. In the case of Raj Babbar, he played a chief minister who is murdered, his place taken by a gangster on whom the minister's face is implanted through plastic surgery!

Two into Two to the 'Four'!

In the cinematic remakes of Shakespeare's A Comedy Of Errors- Bimal Roy's Do Dooni Chaar (1968) and Gulzar's Angoor (1982), Kishore Kumar and Asit Sen, and Sanjeev Kumar and Deven Verma, played two pairs of twins, whom life tosses together! A similar idea of two sets of identical people was used with Amitabh Bachchan and Govinda in David Dhawan's Bade Miyan Chhote Miyan. And Hema Malini and character artiste Premnath both played dual roles within the same film in Dus Numbri.

Finally, we come to the few truly different dual roles in Hindi films, and begin with the 2015 example (and we hope that this is not a spoiler): Jacqueline Fernandez's double essay in Roy. The actress portrayed a sassy filmmaker, who becomes a writer-director's fantasy to the extent that he mentally enhances her character to that of a rich tycoon and a high-society perfect 'lady' in his script.

In end-2014, Saif Ali Khan, also playing a write, is seen frequently discussing life and love with his alter-ego in his home production Happy Ending.

Among the examples in older films, only the 1982 Ghazab, starring Dharmendra as a normal young man and his retarded, rather ugly, brother, was a success. The retarded brother is bumped off by the baddies and turns into a ghost, who helps his normal twin bring the culprits to book.

Then we had Reena Roy, playing elder and younger sisters, not twins, in Khalid Akhtar's Ladies Tailor (1981) and Arjun Rampal. The story is of a man who has lost his memory in an accident, who has been (surgically) given the face of Arjun, who has been murdered, in Girish Dhamija's 2005 Yakeen (2005).