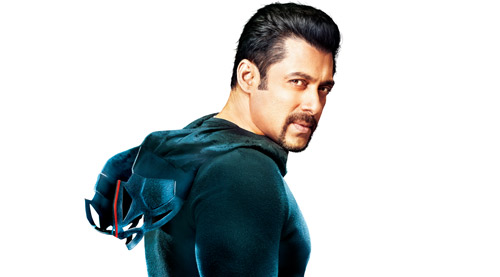 Salman Khan has garnered over Rs. 300 crore all by himself in 2014. While his Kick brought in over Rs. 200 crores, Jai Ho kick-started the year with a century. No wonder, his stardom continues to be on a rise and that is pretty much reflected by the manner in which friends, family and filmmakers have incorporated his name in one way or the other for a movie outing of theirs. Here, we are not talking about cameos (Fugly, Lai Bhaari) that he willingly does for folks but the 'Brand Salman Khan' which has been used in some way or the other.

Call it 'Salman bhakti' or the way to woo his fans or get into his good books or just following the trend, the fact remains that 2014 would go down as one year where a superstar has been paid tribute to in maximum number of movies in the same year.

For the girl with dreams in her eyes, Kangna was content with her love for Rajkummar Rao. However, while she was unleashing the real her, she did confess that deep inside the heart of every girl out there, there is love and affection for a boyfriend like Salman Khan. No, Salman didn't make an appearance in the film but his name did resonate. It is a different matter though that Kangna was happy to be single.

Of course Salman Khan did make a cameo in his brother-in-law Atul Agnihotri's film with a song-n-dance appearance. However, this wasn't all as the makers paid him a homage by showcasing a 'dhabha' that was based on the superstar. No wonder, even the menu items in this 'dhabha' were based on Salman's films like Wanted, Bodyguard, Dabangg and Ready amongst others.

He didn't appear for a single shot in this film made by David Dhawan, his old time professional and personal associate. Still, his presence was there right through the film, what with him playing the voice of God. Out there to guide Varun Dhawan during all his mischief and troubles, Salman unleashed the child inside him and ended up entertaining the audience in quite a few fun moments in the film.

In a film which was based on the glory of Bollywood, how could Salman Khan not feature in a prominent way? So even as the lead actor Sharib Hashmi went on to mimic quite a few actors, there was special love and affection reserved for Salman Khan. A key ingredient here was Maine Pyaar Kiya which formed a major part of the film, even as Sharib went about reciting an entire scene dialogue by dialogue.

Ok, so Rani Mukerji played a cop in the film, and a tough one at that. Still, she had some fun moments in there and did indulge in some casual banter. That was established at the beginning of the film itself when a roadside vendor offered her some sunglasses to try out. The Salman connection? Well, they were sold as those historic shades that Chulbul Pandey had worn in Dabangg.

This was the 'baap' of all homage ever made, and that too from an unsuspecting accomplice in the form of Vishal Bhardwaj. It isn't easy to imagine Salman Khan in a Shakespearean affair but Vishal managed not one, but two of them in the film by basing his police informers on the actor's mannerisms. They talked, walked and dressed up in a way that would have made Sooraj Barjatya further proud of Prem.

This was the time when Shahrukh Khan and Salman Khan hadn't quite kissed and made up. Still, in Happy New Year, Farah Khan didn't mind bringing in a 'dabangg' moment by making Sonu Sood lose his shirt with his bulging biceps. Thankfully, no one created a controversy around this being termed as 'See, they are taking a dig on Salman Khan', and instead it was tagged as a homage of sorts to the actor.

"Salman Khan says, 'Friendship mein no sorry, no thank you'" - and so said Ranveer Singh to Parineeti Chopra in Kill Dil. The dialogue came out of nowhere and didn't leave much of an impact either, though delivered well. A little bit out of context and appearing as a forced inclusion in the narrative, the line appeared to be nothing more than a way to cater to Salman Khan fans. No wonder, it largely went unnoticed.

In Main Aur Mr. Riight, the character of newcomer Barun Sobti is entirely based on Salman Khan. Not does he carry the locks a la Radhe from Tere Naam, he even has posters of Salman adorn the walls of room. As a matter of fact, he swears by him, well literally, by time and again mouthing - 'Salman bhai ki kasam'. Also, it is a sequence from Hum Aapke Hain Kaun that makes him realize his love for Shenaz Treasury.

'Main Toh Superman, Salman Ka Fan' - The song was released in 2014 and this one has to be an official 'fan moment' for Arjun Kapoor as he pays an unabashed homage to the superstar. Though there have been instances before when a mention or a line or two appreciating a superstar is included in a song. However, this one takes the cake where Arjun paints the town red by announcing his fan moment for Salman. Case of reel life meeting real life!