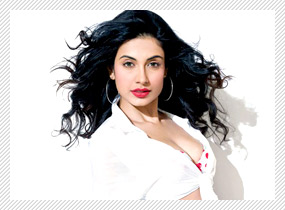 An adult comedy isn't a genre that many would be comfortable with, especially when it comes to leading ladies who are just beginning to find their feet in Bollywood. However with changing times, there are also spunky girls like Sarah-Jane Dias who are comfortable with their skin and are ready to take the challenge head on. As she moves on from a much darker Game to the fluorescent world of Kyaa Super Kool Hain Hum, Sarah candidly admits that never once was she uncomfortable with all the double entendres and adult references in the film.

Looking at the film, it is obvious that there were no limits defined.
(Laughs) I don't even want to go there; we have been 'maha' shameless while doing everything possible under the sun as far as adult humor is concerned.

But double meaning dialogues have pretty much filled the frameâ€¦
Double? Arrey there are triple meaning dialogues as well if you start interpreting them closely (says animatedly). For some it would be naughty while others may be shocked to see something like that in a Hindi film. Anyways, to each his own; we are selling what we promised. The expectation was to bring on an adult comedy and we have presented exactly that. Our film is more than just silly sex references though. There are jokes that have been planted smartly with a lot of thought. As an audience you need to hear the dialogues carefully as there is a lot being offered.

Well, at least the audience can't complain of being cheatedâ€¦.
Precisely. We never showed anything in the promo that wasn't an integral part of the film. Moreover we also stayed away from revealing much. Otherwise there are instances for some other films when the best parts are shown in the promos and there is nothing else left for the audience to watch in theatres. We showed only a few snippets and all credit goes to (writer-director) Sachin (Yardi) for creating so much material that a lot of fun stuff could be put on hold for the big screen. He worked a lot on each and every dialogue in the film and gone back and forth to make sure that we get the right words at the right times.

But when you heard the film's script for the first time, what was your reaction?

Honestly, my first instinct was 'yes' and I didn't take long to say that. I wanted to do something like this from a long time as this was light hearted whereas my debut Hindi film Game was very serious. For some time at least I didn't want to do anything overtly dramatic. Kyaa Super Kool Hain Hum arrived at the right time since I liked the very concept of an adult comedy. I was laughing throughout as Sachin brought the comic scenes to reality. It is always more difficult to make someone laugh than cry.

Well, I guess you must have dropped a tear or two at least when Game didn't turn out to be a commercial success last year.
Not at all, I have moved on. Did you find me depressed then? Nahi naa! For me, in my mind the film was a good success. When I saw the final product, I was so happy and felt that I had done well. I had no reason to be upset as not even one critic had anything bad to say about me. Being content, I just moved on to the next project.

So where do you move now after Kyaa Super Kool Hain Hum?
Well, let me first enjoy the excitement of film's success. As such there is a lot on the cards. I have been approached for three films and I am in the process of choosing the ones which are apt. Most likely I would sign two of out of these three offers.