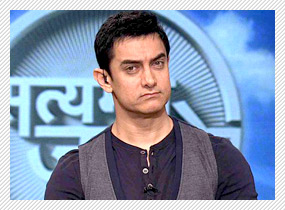 I am going to remember May 6, 2012 for a long time to come. That was the day when the first episode of 'Satyamev Jayate' was aired. I had no idea what the show will be all about but I was dead sure that it would be worth a dekko. After all, it's Aamir Khan backing the show. Yet, the episode exceeded my expectations. For the first time, I realized the profound impact of television as a medium. Twitter and facebook users went on an overdrive discussing and condemning female foeticide, the topic of discussion in the inaugural episode. Many state governments too swiftly acted on it, with the Government of Maharashtra wanting to equate foeticide with murder.

The beauty of each episode was that the burning problem that was discussed was familiar. We all had read about the horrors happening in our country in newspapers or in school/college textbooks. However, it's the treatment and the overall presentation that made 'Satyamev Jayate' stand out. The core team tried their best to pick up the most shocking stories to make the maximum impact. To avoid needless controversies, the identity of perpetrators of crime was not revealed and yet the effect was profound. Another significant factor was that the topic wasn't disclosed in advance. Also, Aamir's intro speech was a pro. Slowly and significantly, he revealed the theme of the episode while the audiences would be thinking, 'pata nahi aaj kaunsa bomb fodenge Aamir sir'! Each episode was praiseworthy with only the one on love marriages that could have been better. But no complaints! I was stunned, shocked, amazed, surprised, angered and overwhelmed by the tales of cowardliness, discrimination, injustice and bravado presented on 'Satyamev Jayate'!

At the same time, I felt ashamed to be living at a time when the state of India is at its worst. We beat our wives, demand dowry, don't care for the handicapped and elderly, don't respect water, discriminate on the basis of castes, separate and kill lovers, get conned by medical professionals, kill female child before its born and what not! In that context, the final episode was significant. It focused on ordinary people of the country who performed extraordinarily and thereby followed the path of the preamble of the nation that was envisaged by the lawmakers during independence. A couple in Gujarat gave refuge to victims of 2001 earthquake and 2002 riots and ensured that communal feelings didn't develop among them. A gang rape victim rescues prostitutes (some as young as 3 years old!) without any fear, even after a person working under her was murdered. A Muslim family persuaded their Hindu Pandit neighbor to not flee the valley and moreover, the Hindu lady later on won the elections in the Muslim-dominated village! A lad, who was sent to an orphanage by his own mother, studied hard and fulfilled her dream - started a hospital for the poor and needy. These and many more was the emphasis of the final episode. The tragic story of Satyendra Dubey took the cake away as being the most disturbing of the lot.

Towards the end, Aamir read my mind when he said that the people post their 30s and 40s are wrong in putting the responsibility of bringing change to the next generation. Everyone has to be united in bringing the change is what he rightfully suggested. And in order to vanish the thought of 'how-will-I-alone-bring-change' from people's minds, Aamir presented the tale of Dashrath who singlehandedly spent more than 20 years of his life trying to carve a path in a mountain, reducing the distance of a place from 70kms to mere 7kms! Hats off!

Ending the episode with a live performance was another uniqueness of 'Satyamev Jayate' and the final episode bid adieu with the beautiful track 'Nikal Pado Re'. On the whole, 'Satyamev Jayate' will be remembered for years to come. It was not just a television show. It was a movement that strived to bring change through acceptable means. Hope the second season starts soon and I hope that all the issues discussed by Aamir are given prominence by the respective authorities and that justice is done at the earliest. Thanks a ton Aamir and team! Dil pe lagiâ€¦baat bani indeed!

Watch the video: Satyamev Jayate: The Idea of India - We The People (Episode 13)