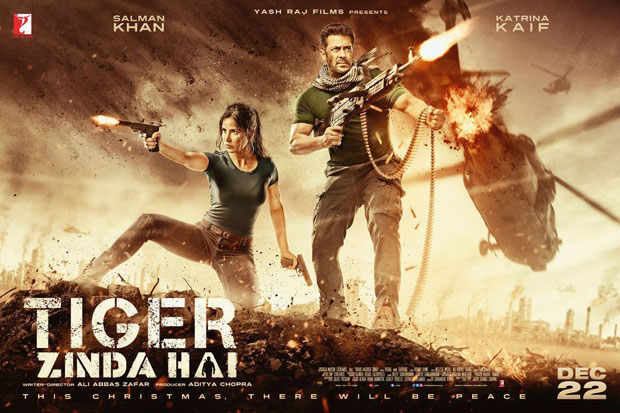 2017 hasn’t been a great year. 10 months have already passed and still Bollywood is yet to give a Rs. 150-crore-grosser, forget a Rs. 200 crore or Rs. 300 crore grosser that we often get by this time of the year. A lot was expected from films like Tubelight, Jab Harry Met Sejal and Raees but they either underperformed or flopped. Films like Jolly LLB 2, Toilet – Ek Prem Katha, Judwaa 2 and Golmaal Again saved 2017 from becoming the ultimate disaster; all these films worked well at the box office. But a blockbuster was yet to come.

All hopes were now pinned on Padmavati, Sanjay Leela Bhansali’s next starring Ranveer Singh, Deepika Padukone and Shahid Kapoor, and Tiger Zinda Hai. It’s difficult to say how far Padmavati will go but Tiger Zinda Hai seems to be a sure-shot blockbuster and the poster that has been unveiled today confirms that!

This poster in question looks ‘Wow’ in all respects! Salman Khan looks dashing and macho, wearing an army Green T-shirt, his hair neatly styled and the scarf lying around his neck. The way he’s shooting for his machine gun and the long ammunition belt makes for a great watch – as if Salman is all set to finish his opponents, come what may! And Katrina Kaif is a surprise! Her no-nonsense look and the manner in which she’s holding the pistols seem extremely convincing and also sexy! A helicopter falling down and a slightly sepia tone of the poster are praiseworthy. The title is written in a rugged way and don’t miss the silhouette pose of Tiger in the ‘A’ in ‘Hai’!

What doesn’t work is the tagline – “This Christmas, there will be peace.” It just doesn’t go with the entire action feel of the poster! But that won’t pose a problem as most of the moviegoers are going to concentrate on the poster on the whole and not think much about the tagline.

Tiger Zinda Hai will surely up the excitement with this poster and it remains to be seen if the trailer also manages to increase the hype. If that happens, there’s no stopping Tiger Zinda Hai from becoming the biggest grosser of 2017!