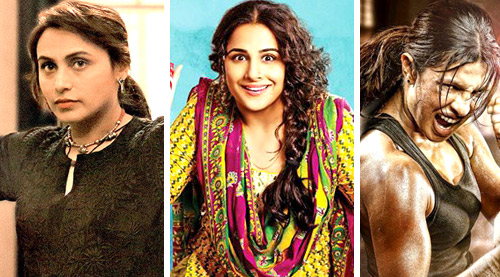 So Rani Mukerji's Mardaani has had an opening weekend of over Rs. 14 crores. Given the Yash Raj Films model of making a film, it will obviously end up as a profitable venture. Queen, which starred Kangna Ranaut, had managed only a Rs. 10 crore opening weekend, but went on to be the only clean hit of the first quarter of 2014.

Two more heroine-oriented films, Revolver Rani (Kangna again) and Bobby Jasoos (Vidya Balan) recently collapsed at the BO. Which brings us to the question: Where does the heroine stand today - firstly, on her own and secondly, in the male-oriented movies, especially those centered on A-list heroes?

Taking the first case, we go into an interesting speculation, days before the release of Priyanka Chopra's Mary Kom - which is: How strong would those four films we mentioned have been had they (somehow) starred the A-list ladies - Deepika Padukone, Katrina Kaif, Kareena Kapoor, Priyanka herself and Sonakshi Sinha? And what will happen to Bipasha Basu's Creature 3D and Sonam Kapoor's Khoobsurat?

The safe and sane conclusion is the perennial thumb-rule: that good films like Mardaani and Queen would definitely have fared better (or still better, if they were already successful) with these commercially bigger heroines.

But when the big-name male stars cannot take their bad or boring films to the level of successes or hits (except maybe a Salman Khan today), it is the script and content that are paramount in deciding the fate of every film, including the female-oriented ones!

Like Omung Kumar, the Mary Kom director, says: "Priyanka was my only option - she was experienced, commercially saleable and dedicated." And when this movie has reportedly moved the real Mary Kom to tears, it is clear that putting in that extra effort is what finally separates the triumphs and the defeats - after all, Vidya Balan in Kahaani won the game because the script and director gave her that chance, but that did not happen with Bobby Jasoos.

Let us remember that even a Madhuri Dixit (Aaja Nachle) or her combination with Juhi Chawla (Gulaab Gang) just could not achieve what an older star Sridevi could in the brilliantly-conceived, scripted and directed English Vinglish.

So we must note that in a male-dominated society like ours, it requires an extraordinary script for a woman to score, though at the business level, none of the ladies can match the crowd-pulling power of the three Khans, Hrithik Roshan, Ajay Devgn and Akshay Kumar. Nevertheless, hits should ideally be about the return of investment, and that the heroines can do almost as well!

And so we come to the second and commercially more important query: does the heroine count at all in the huge blockbusters that star these six names?

A careful scrutiny shows that indeed they do. Take Kick - Jacqueline Fernandez may have put in an unexpectedly accomplished performance, danced brilliantly and dubbed her own lines with the right inflections, but she simply lacked the face-value that any A-list heroine could have given to that film.

One reason why Singham Returns has scored over Kick is the presence (however ornamental) of Kareena Kapoor. In my considered opinion, based on track-records over the last many years, Kareena, just by her value add-on presence, has added a neat Rs. 20-25 crores to the revenue amassed by the film. Hindi cinema has always had a romantic team-crazy audience, and any top star hero-heroine combination is looked forward to as a possible addition to legendary star-pairs like Raj Kapoor and Nargis, Dharmendra and Hema Malini and Amitabh Bachchan and Rekha.

But that's just the fringe benefit. The main issue is that when a family spends upwards of a thousand bucks on watching a film, they want value for money, which does not happen when a Salman Khan stars with an "un-starry" Daisy Shah, or an Akshay Kumar romances a Tamannaah Bhatia in Entertainment.

And so, we personally feel that it is a myth that the big superstars alone can drive a film to the 100-crore club (to take just a landmark in nett domestic collections irrespective of the film's actual cost!).

Because they also need (besides hit music) a big-name heroine!

And at the outset, let us discuss the mini-Salman in the female ranks: Deepika Padukone. Today, she can even pull off a blockbuster like Yeh Jawaani Hai Deewani and a big hit like Goliyon Ki RasLeela Ram Leela - seemingly - primarily on her own steam. In both cases, the script, direction, music and leading men measured up too, but Deepika is today in a zone where she could be called the seventh name alongside the six super-stars!

This complete superstar-ini thus not only never takes any ornamental role (in the last four years), but makes her presence felt even opposite a Shah Rukh Khan in Chennai Express) and shows an amazing peak-time Madhuri-esque versatility with each role. So much so that we expect Finding Fanny to have a rousing reception only because of her, with the rest of the powerful ensemble cast and the content being just the bonuses.

It is also very interesting to know that - unless the film is not top star-driven like Bhaag Milkha Bhaag, Grand Masti, 2 States, Ek Villain or past super-hits like Murder 2, Aashiqui 2 - it is almost always the top-league heroine who has featured in the highest-grossing (plus and minus 100 crore) films - Kareena (3 Idiots, Golmaal 3, Bodyguard, Ra.One, Talaash, Singham Returns), Priyanka Chopra (Don 2, Agneepath, Barfi!, Krrish 3), Katrina Kaif (Zindagi Na Milegi Dobara, Ek Tha Tiger, Jab Tak Hai Jaan, Dhoom 3) and Sonakshi Sinha (who was a rank newcomer in Dabangg but later had Rowdy Rathore, Son Of Sardaar, Dabangg 2 and Holiday) besides Deepika (Race 2 as well).


Even in 2014, when the new breed of star-youngsters have cornered the next top slots after the A-list, like Ranveer Singh, Arjun Kapoor, Varun Dhawan, Sidharth Malhotra, the females in the corresponding reckoning - Shraddha Kapoor, Alia Bhatt and Parineeti Chopra - are also important players who contribute their own muscle to the film - and I am not talking of the physique that Shraddha is building for ABCD 2!.

Think 2 States, the flop Highway and Humpty Sharma Ki Dulhania minus Alia Bhatt or Aashiqui 2 and Ek Villain minus Shraddha Kapoor and even Hasee Toh Phasee without Parineeti Chopra and you will have your answer.

The conclusion: We may not be in the phase in which Nargis could get a Mother India, or in the diverse peak eras of names like Meena Kumari, Nutan or later Sharmila Tagore, Raakhee or Rekha. But the heroine is no longer only a decorative piece.

She counts - in converting a disaster into a merely unsuccessful film, a success into a hit, and a hit into a blockbuster.