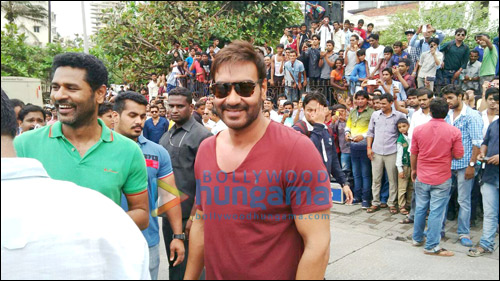 After the success of Singham Returns, Ajay Devgn seems to have gone back to shooting films that are in the pipeline. However, his fans don't seem to get over his Bajirao Singham acts, so much so that, Ajay recently faced shooting troubles because his fans were too busy showering their love for their superstar.

Recently, Ajay Devgn was shooting for the action drama Action Jackson at the popular location of Bandstand in Mumbai. However, the actor was caught up in a fix because his loyal fans were making it impossible for him to shoot smoothly in the vicinity.

The crowd went totally berserk and were heard screaming Aata Majhi Satakli. These words became famous with Ajay Devgn's Singham and the actor even made a song using it as lyrics for the sequel Singham Returns. The song had Yo Yo Honey Singh and Ajay's co-star in the film Kareena Kapoor dancing to the tunes along with hundred kids. Apart from the dialogue, even the song gained a lot of momentum owing to its peppy beats and Marathi lyrics.

Hearing his fans scream it, Ajay was overwhelmed with the response and even waved out to the fans excitedly. In fact with so many fans surrounding the venue, the shooting had to be halted for a while for the crowd to subside.